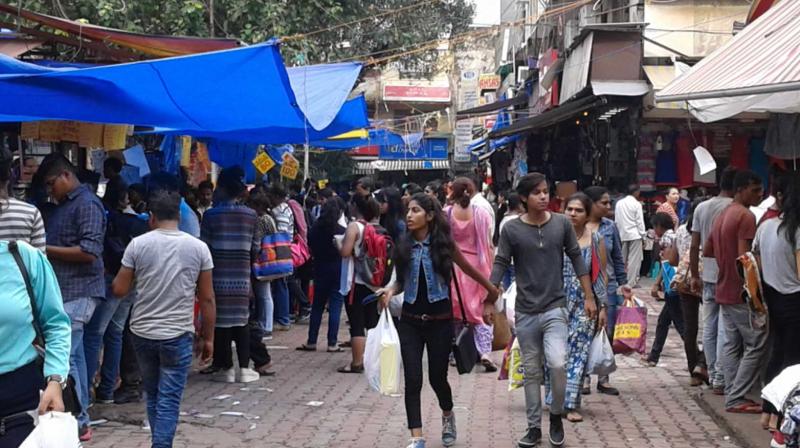 The Sarojini Nagar market is thronged by hundreds of people daily.

New Delhi: It was in 2005 that the popular Sarojini Nagar Market witnessed a major bomb blast, killing 50 people and injuring 127 others. But even after 12 years, the security of the area, which is thronged by hundreds of people daily, is taken for granted. Security infrastructure like metal detectors and CCTVs, which were put in place after the bomb blast, do not function properly.

The Sarojini Nagar Mini Market Traders’ Association president, Ashok Randhawa, said that the detectors installed at the entrances are never found in working condition except during the festival season. Out of the 25 cameras installed, only 14 were found to be working currently.

The market association has approached the government authorities on several occasions to incre-ase the security, but in vain. In fact, the SHO of the area recently asked the association to install CCTVs on its own, ahead of the Independence Day, following which eight more cameras were installed.

“There are around 1,000 unauthorised shops that do not have the license to operate and 600-800 street hawkers who move around the market selling purses, perfumes, belts, etc. In order to make the market secure for the visitors and shopkeepers, some permanent measures like a proper fencing, should be taken into account. There should be a separate entry and exit to the market,” he said.

“It is a hub of visitors and on the eve of festivals, the footfall increases four times. The Delhi government, along with the North Delhi Municipal Corporation, should work on a serious note in order to ensure the security of the place,” he added.

Meanwhile, various security measures have been put in place for the upcoming Independence Day. Police officials are patro-lling the area on a daily basis and various officials are moving around dressed as civilians. Bomb squad teams and sniffer dogs are also doing rounds of the market.