Delhi Congress workers staged dharnas at petrol pumps across the city, protesting against the hike in fuel prices. 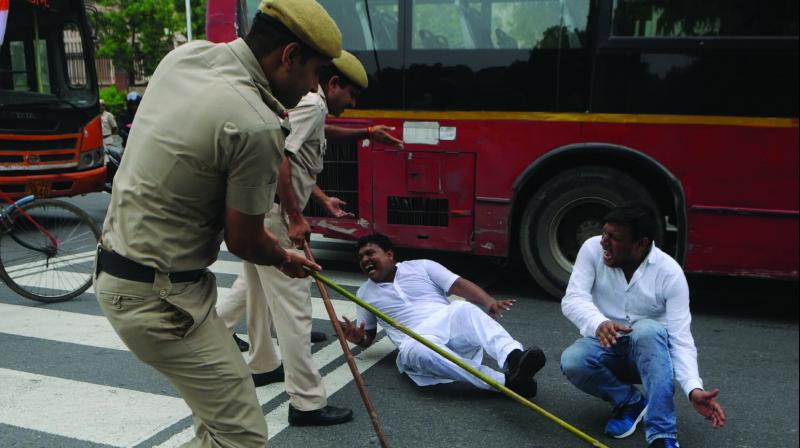 Policemen lathicharge on members of Indian Youth Congress in New Delhi on Monday during the ‘Bharat Bandh’ called against fuel price hike and depreciation of the rupee. (Photo: Biplab Banerjee)

New Delhi: There seemed to be no impact of the “Bharat Bandh” call by Congress against the steep hike in petrol and diesel prices, with offices, schools, and colleges opening at their regular time and vehicles plying on the roads on Monday.

Despite protests staged by Congress, offices were opened on time and official work was not affected at the Delhi Secretariat due to the strike. Schools and colleges also had classes on time though students experienced difficulties in finding transportation.

Even DTC buses and cluster buses were running as usual and no reports of disruption were received.

Traffic movement was normal across the city. However, roads leading to Rajghat and Ramlila Maidan, where Congress president Rahul Gandhi and senior party leaders Sonia Gandhi and Manmohan Singh among others held a protest, witnessed heavy traffic.

Delhi Congress workers staged dharnas at petrol pumps across the city, protesting against the hike in fuel prices. Congress, meanwhile, appealed to its workers not to indu-lge in any violent protest.

Heavy police deployment was made in the national capital with reserve police forces and motorcycle patrols put on high alert and police personnel deployed at petrol pumps across Delhi to ensure that no untoward incident took place.

Traffic was affected in Daryaganj and around Ramlila Maidan due to the protest and commuters faced problems in reaching their destinations as the cab companies had hiked their fares.

Senior Congress leaders, including Delhi unit chief Ajay Maken, protested by riding a bullock cart to a petrol pump near Rajendra Place. A scooter was kept atop the cart symbolising the plight of the common man.

Mr Maken said protests were held “peacefully” and the party did not want to create more problems for the people who are already being hit by “unprecedented” rise in petrol and diesel prices.

“The prices of fuels have gone up without any break because the AAP government in Delhi and the BJP ruled Central government have kept on increasing VAT and excise duties on petroleum products,” the Congress leader said. Congress national spokesperson Randeep Surjewala said that the prices of petrol and diesel have reached Rs 83 per litre and Rs 73 per litre respectively.