Ecologists said that there has been a gradual rise in their numbers since September 2015. 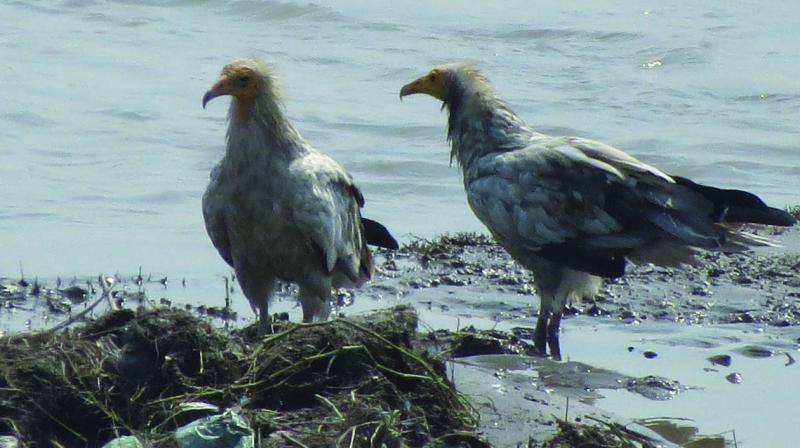 A pair of Egyptian vultures

New Delhi: Egyptian vulture, which had disappeared from the city, seemed to have made a comeback if the increasing trend in its numbers in the last three years is to be believed.

The overall vulture population had plummeted to near extinction across the country and a rapid decline in their numbers was recorded between 2000 and 2007. However, in some good news, at least 25 vultures were sighted at a particular sandy mid-island on the Yamuna river last week.

Ecologists said that there has been a gradual rise in their numbers since September 2015. While four Egyptian vultures were sighted at Bhati Mines Forest in South Delhi in 2015, 10 of them were sighted at the same sandy mid-island on the Yamuna where they have been noted even this month.

“This island is isolated and they may have come here because there is not much human disturbance here. During the last few years, repeated sightings in smaller population annually indicate that they might be successfully breeding in the NCR of Delhi region,” said T.K. Roy, ecologist and conservationist.

Egyptian vulture is the smallest species among nine vulture species available in the Indian sub-continent has its large ranged distribution in Europe, Africa, and Asia but its population has rapidly declined due to reasons like poisoning, electrocution, scarcity of food, habitat loss but largely due to toxic effect of veterinary drug i.e. diclofenac through livestock carcasses.

Due to rapid population decline, it is listed as globally threatened “endangered” category of birds since 2007 by IUCN (International Union for Conservation of Nature).

“They had completely disappeared from Delhi region and its feeding habitat had also being changed probably due to the scarcity of available usual foods. It feeds now on any kind of biodegradable garbage apart from the usual feeding of carrions,” he said.

The vulture is a useful scavenger and plays a key role in the environment as ecosystem service provider as it feeds on carrion and keeps the natural environment clean and controls spreading viral diseases from decaying carrions.