Tiwari claimed that the raids were conducted on the basis of complaints filed by “some AAP members”. 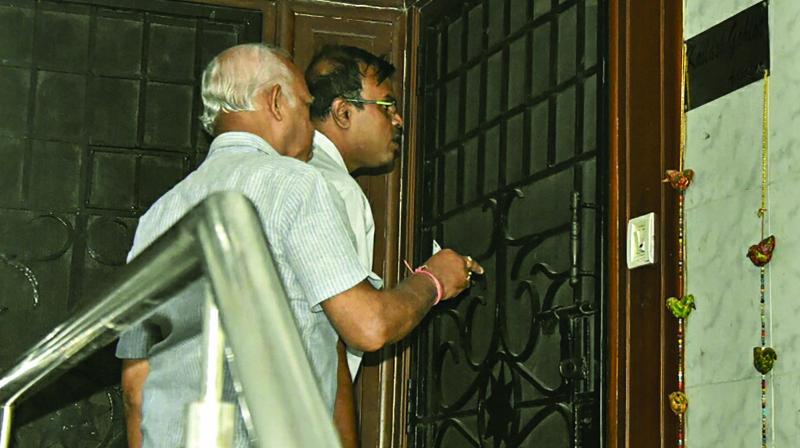 The ruling AAP accused the Modi government of trying to “intimidate” the AAP dispensation by getting its leaders and ministers raided by Central agencies. The party also termed the raid as “political vendetta”.

Meanwhile, the BJP demanded removal of Mr Gahlot from his post. Delhi BJP chief Manoj Tiwari said Mr Gahlot should cooperate in the probe because it’s the duty of the agency to investigate allegations levelled against anyone no matter how powerful they are.

Mr Tiwari claimed that the raids were conducted on the basis of complaints filed by “some AAP members”.

“Friendship with Nirav Modi and Mallya and raid on us? Modiji you conducted raids on me Satyendar and Manish what happened to those (raids). Nothing was found. So before you go with another raid at least apologise to Delhi people for troubling their elected government,” Mr Kej-riwal tweeted in Hindi.

The Najafgarh MLA holds charge of several departments in the Kejriwal government. They include law and administrative reforms department that are handling the matter of disqualification of 20 AAP legislators for holding posts of parliamentary secretary, and the doorstep delivery of services scheme, respectively.

“It’s clear why Kailash Gahlot is facing income-tax raids. Mr Modi and (Amit) Shah want illegal and unconstitutional disqualification of 20 MLAs whose legal battle was being led by Mr Gahlot. He also oversaw successful implementation of doorstep delivery scheme despite efforts to derail it by the BJP,” AAP leader Atishi said.

AAP supports investigation of allegations, but why single out only party’s leaders and ministers, she questioned. “No matter which agency Modi and Shah send after us, we will not be intimidated and continue to serve people in Delhi,” she said.

Another AAP leader Saurabh Bhardwaj said the Central agencies, including the CBI, ED and the income-tax, should disclose if it found anything related to “corruption” during their raids on AAP leaders and ministers.

“Many such raids happened in the past but nothing substantial came out and nor any charge sheet was filed,” he said. The searches were conducted as part of a tax evasion probe against two construction firms linked to the minister and others, the officials said.