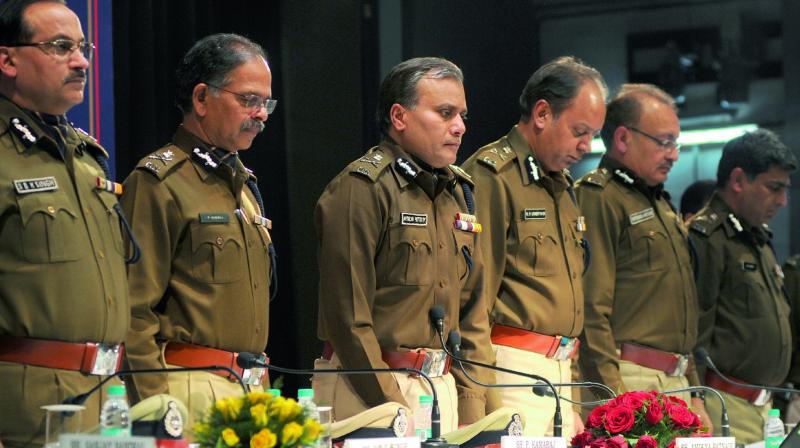 Delhi police commissioner Amulya Patnaik (2nd from left) and other top city police officers stand in silence to honour those policemen who died on duty during a press conference in New Delhi. (Photo: Biplab Banerjee)

New Delhi: The crime graph of the city went up by 12 per cent in 2017 in comparison to that of the previous year. The Delhi police attributed the increase in the crime rate to online registration of FIRs. A total of 2,23,075 IPC cases had been registered during the year as against 1,99,110 in the corresponding period of 2016.

Delhi police commissioner Amulya Patnaik said that the “socio-economic disparities” are a significant criminogenic factor coupled with other issues.

“The socio-economic disparities between the opulent and the less affluent are a significant criminogenic factor and the resultant youth impatience, driven by a pronounced get-rich-quick penchant, gets discernibly reflected in delinquent street demeanour,” he said. The Delhi police chief said that the issues of women’s safety and the menace of street crime demanded a focused strategy. With incidents of terror occurring frequently across the globe, anti-terror measures were also on the top of their list.

Mr Patnaik said that last year, their focus was on preventive policing rather than reactive policing.