A staunch AAP supporter dressed up his three-year-old son as Chota Kejriwal. In 2015, his daughter too had dressed up as the Delhi CM. 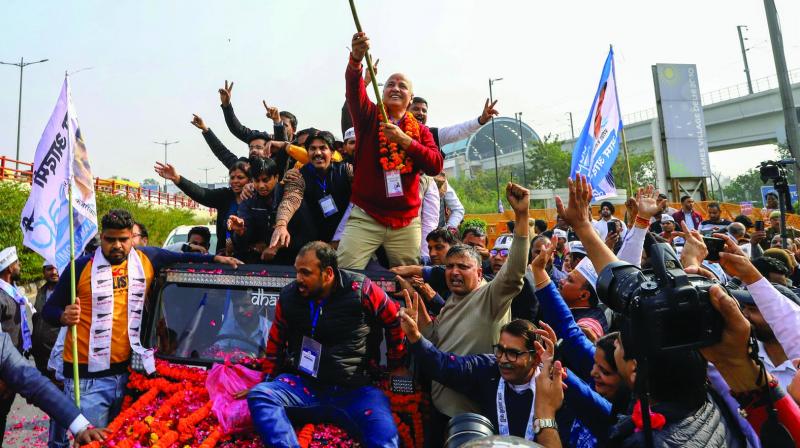 New Delhi: Donning Aam Admi Party’s signature cap, hundreds of AAP volunteers and supporters turned up the heat at the party headquarters at DDU Marg on Tuesday as they danced on the party’s campaign song “Lage Raho Kejriwal” while celebrating the landslide victory in the Delhi Assembly polls.

As the trends showed the party was set for a massive victory for the second consecutive time, a wave of AAP workers chanting slogans “Ache Beetenge Panch Saal-Lage Raho Kejriwal” thronged the party headquarters carrying blue and white balloons, placards, masks and giant cut-outs of their leader Arvind Kejriwal.

The AAP national convener and chief minister Arvind Kejriwal had asked the party volunteers not to burst firecrackers during celebrations to prevent air pollution. As the party’s tally went up, AAP supporters hugged each other, played with gulal and offered “ladoos” amid a surcharged atmosphere. Several supporters draped themselves in the Tricolour and flashed victory signs as the giant screen showed the party’s surge. The party workers interpreted the AAP show as the victory of development works.

Overjoyed by its outsized victory, the party supporters holding Tricolour raised slogans of “Bharat Mata ki Jai and Vande Mataram.” “Delhi bach gayi (Delhi is saved),” said Jitin Singh, an engineer and a volunteer. “We have barely slept in the last few months. I can’t tell you how happy we are,” he said.

A staunch AAP supporter dressed up his three-year-old son as Chota Kejriwal. In 2015, his daughter too had dressed up as the Delhi CM.

Another jubilant party worker, Suman Kumar said: “We knew it. We have changed the politics of this country. Now it is Delhi, next is India.”