During his poll campaign and rallies, Mr Kejriwal had claimed that the AAP would sweep polls in Punjab and Goa. 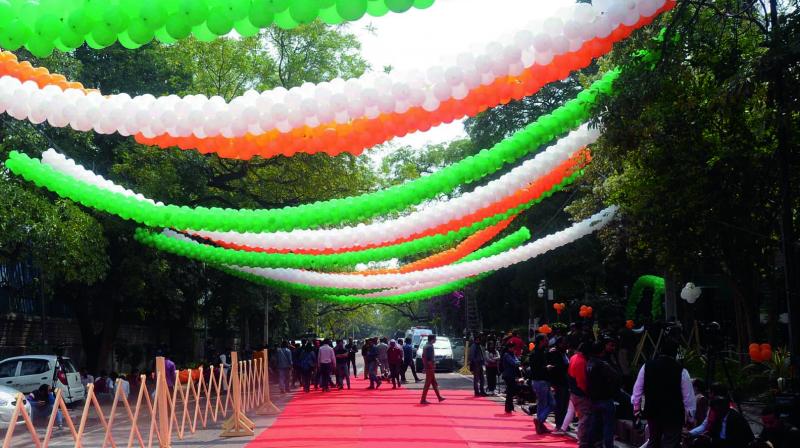 A red carpet outside Chief Minister Arvind Kejriwal’s residence on Saturday lies empty. The mood was sombre outside the CM’s house. The party workers who were gathered outside began to leave, disheartened, after news of AAP’s drubbing started trickling in. Only policemen and mediapersons waiting for the CM to make a statement were left.(Photo: G.N. Jha)

New Delhi: The AAP finishing off at a distant second in Punjab and failing to open an acc-ount in Goa is set to loom large over the upcoming municipal elections in the national capital, where the party is making its debut. Finishing off at 20 seats in Punjab has come as a rude shocker to the party, which had been banking on its win in the state and taking forward the spirits of its cadre to contest the civic polls in the city, due in April. Ap-art from this, the party’s inability to open an acco-unt in Goa is bound to have a bearing on the crucial civic polls in the city, political experts said.

Led by chief minister Arvind Kejriwal, who had been campaigning aggressively in Punjab and Goa, the party had been exuding confidence in sweeping the two states. AAP’s win in the two states, especially Punjab, would have given filip to the organisation in the run up to the municipal polls in the city. A party worker said that the poor performance in the state elections is bound to dampen the spirits of the workers, who would have got a shot in their arms with the win. However, the party leadership denied that the election results will affect the party’s performance in the civic polls.

“We accept the people’ decision. The party cadre has worked very hard. The struggle will continue,” the chief minister tweeted after the results.

During his poll campaign and rallies, Mr Kejriwal had claimed that the AAP would sweep polls in Punjab and Goa. On the contrary, the party could not even open its account in Goa, with its chief ministerial candidate Elvis Gomes coming a distant fourth from Cuncolim. In Punjab, the AAP has won 20 seats, marginally ahead of the BJP-Akali combine.

Speaking to reporters, senior AAP leader Kumar Vishwas said that the party accepts the people’s mandate and will work hard for the civic polls in the city. “A defeat does impact the enthusiasm of the volunteers, but the challenge for the party leadership is to keep them intact and prepare for the next win.” He said, in the upcoming MCD polls, the party intends to hard-sell work done by the Kejriwal government in different fields.

“In MCD polls, we will go to people showcasing the good work done by the Delhi government in the field of health, education, electricity and water. We will win the upcoming municipal polls,” Mr Vishwas said.