AAP has been rejected, BJP only option: Manoj Tiwari 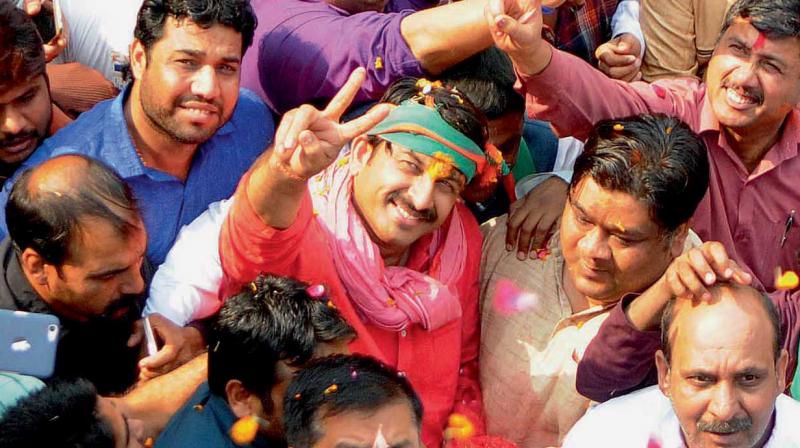 Banking on party success in the state Assembly polls, Manoj Tiwari in a freewheeling interview to Shashi Bhushan has said that people have accepted BJP and Prime Minister Narendra Modi’s policies and rejected AAP. BJP star campaigner Mr Tiwari added that in the coming civic polls, Delhiites would correct the mistakes they had made in the last Assembly election in February 2015

Q. Do you think that the Assembly poll results will have any impact on the upcoming civic polls in the national capital?
A. Today’s poll results in five states have established one fact — Prime Minister Narendra Modi is the only acceptable leader across the country and BJP is the only party that is really concerned about the poor and all the sections of society. Results show that people are only concerned about good governance, jobs, infrastructure and better conditions, which have been taken up by the Modi government in its two-and-half years. While other political parties indulge in negative politics, BJP and Mr Modi always talk about development and we will contest the upcoming municipal elections on the agenda of developing world-class civic infrastructure in the city.

Q: Do you think poor performance of AAP in Goa and Punjab will adversely affect Mr Kejriwal’s party in the civic polls in April?
A. Results of Goa and Punjab clearly show that AAP and its leader Arvind Kejriwal has been rejected by the people and they have entrusted their faith in BJP and its leader and Prime Minister. In Goa, Mr Kejriwal’s party even failed to open its account and in Punjab, they performed poorly which shows AAP has lost people’s trust wherever they contested the Assembly elections. For its (AAP’s) political expansion, Mr Kejriwal wasted the hard-earned money of Delhiites in advertisements outside Delhi but people know the reality of AAP and rejected its politics of falsehood. Now in coming municipal polls, Delhiites will rectify their mistake and once again give massive mandate to BJP.

Q. What will be the key issue on which the municipal polls will be contested?
A. Key issue will be a clean, transparent and corruption-free administration as promised by Mr Modi. Our councillors will carry forward the PM’s policies and implement it on ground to provide better amenities.

Q. BJP will be facing anti-incumbency of 10 years in the civic polls. How are you going to defeat it?
A. Yes, this is true. We are facing anti-incumbency but please understand it is only due to good work by the civic bodies that the city has survived these 10 years, as the local government has failed to perform its duty. The AAP government has done nothing and for its failure, it has blamed others. So, people know these things and will vote for BJP for the good work done in the past 10 years despite hurdles created by the state government.