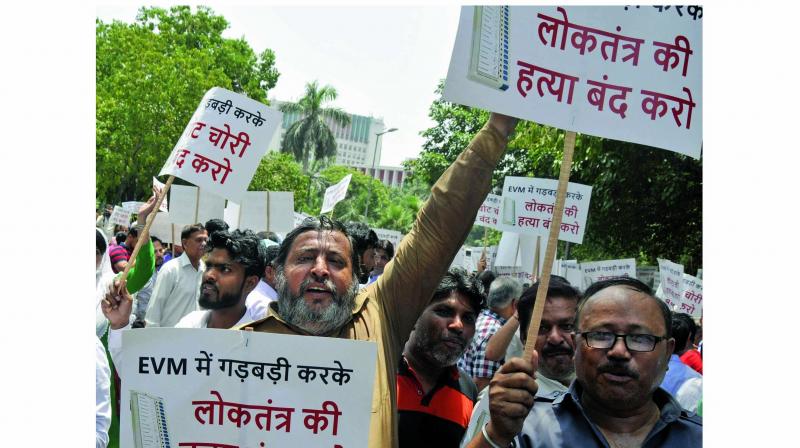 AAP workers protests against the alleged tampering of EVMs outside the Election Commission office in New Delhi on Thursday. (Photo: Bunny Smith)

New Delhi: The AAP, which held a protest against the alleged tampering of electronic voting machines (EVMs) outside the Election Commission’s office on Thursday, demanded that the poll body should allow the technical inspection of the EVMs by the expert panels of various political parties to see if they can be hacked or not. In a memorandum submitted to the EC, the party also demanded that all elections should be conducted only on VVPAT enabled machines so that paper trail guarantees integrity of the electoral process.

“All the future elections should be conducted only on VVPAT enabled machines. In randomly picked 25 per cent of total polling booths in a constituency, EVM counting results must be tallied with the VVPAT slips to check the accuracy of the EVMs,” the AAP’s memorandum of demands said.

Hundreds of AAP activi-sts on Thursday protested outside the Election Commission headquarters agai-nst alleged tampering of EVMs during the recent state polls.

The demonstrators, who included several AAP legislators, raised slogans against the poll panel and carried placards calling for an end to alleged tampering of the electronic voting machines.

“Our MLA Saurabh Bharadwaj has shown that EVMs can be easily hacked,” he said. Mr Rai demanded that the doubts regarding the EVMs should be resolved.

“We appeal to the Election Commission that they provide us their EVM and we will hack it,” Mr Rai, who is also the party’s Delhi convenor, said. He also demanded that the Supreme Court’s 2013 order of conducting elections by using the EVMs equipped with VVPAT should be implemented.

A delegation led by Mr Rai met the officials of the Election Commission and submitted them a memorandum of three demands. The demands included that the commission should allow technical inspection of its EVMs by the expert panels of various political parties to see if EVMs can be hacked.

The Delhi unit of the Congress criticised the AAP’s move, saying there was no need for any protest when the Election Commission has called an all-party meeting on Friday.

“They are talking about the use of VVPAT in elections but they should be aware that the EC had used VVPAT in the Rajouri Garden by-poll where the AAP got only 13 per cent of vote. AAP is doing this to divert the attention of people from the main issues,” Delhi Congress chief Ajay Maken said.