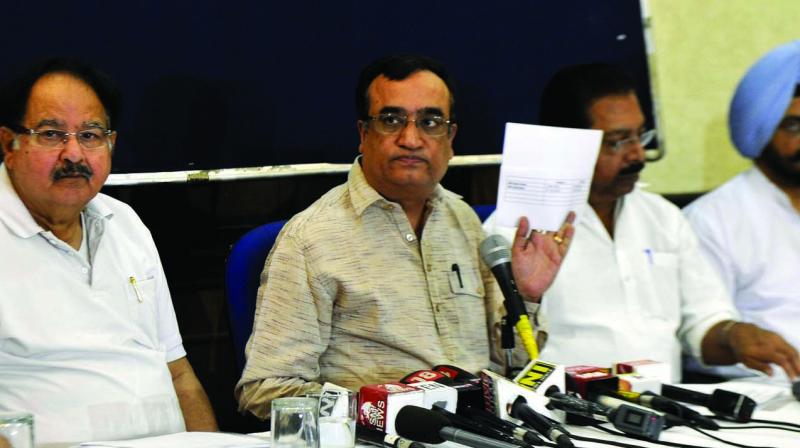 New Delhi: Demanding chief minister Arvind Kejriwal’s resignation, Delhi Congress president Ajay Maken, on Friday, alleged that the AAP government has compromised the security of the nation for “kickbacks” in the matter of installation of CCTV cameras in the national capital by awarding the contract to public sector undertaking (PSU) Hikvision, with 58 per cent share of the Chinese government, through Bharat Electronics Ltd (BEL).

Mr Maken said that the Central government rules clearly stated that any security-related equipment should not be purchased from China.

Mr Maken said if Mr Kejriwal does not put in his papers, his party will hold a massive protest outside his residence on Sunday. The Congress leader also said he will approach the CBI, the Central Vigilance Commi-ssion, and L-G Anil Baijal to get the entire matter investigated. If need be, his party will also move the court against the CCTV project, he added.

Mr Maken alleged that the government had even tweaked the tendering process to pass on the project to the Chinese company. He said in the first bid the tenders were rejected. But in the second bid, in which the cost of the project was increased, the same was granted to Hikv-ision, which had got itself empanelled recently with the BEL, a PSU under the Union defence ministry.

The EPF minutes said the proposal regarding the CCTV project “shall be placed before the Cabinet for approval and sanction along with a detailed action plan for implementation of the project.”

Mr Maken also wondered how a PSU under the ministry of defence had allowed empanelment of a Chinese PSU. He said once the CCTV cameras are installed across the city, the Chinese government will be able to track the movement of all the VIPs and defence establishments in the city. He demanded strict action against all the ministers and officers who were involved in awarding the sensitive project to the Chinese PSU.

Mr Maken also played an audio clip in which a Congress leader posing as an officer of the Punjab government talked to a representative of the Chinese PSU, who had participated in the meeting of the PWD on the CCTV project. In the audio clip, one can hear the Chinese PSU representative confirming that the CCTV project for Delhi had been awarded to his company and he was willing to do the same for the Punjab government.