One of the neig-hbours said one of the Kashmiri men ‘misbehaved with women’ and the fight started because of it. 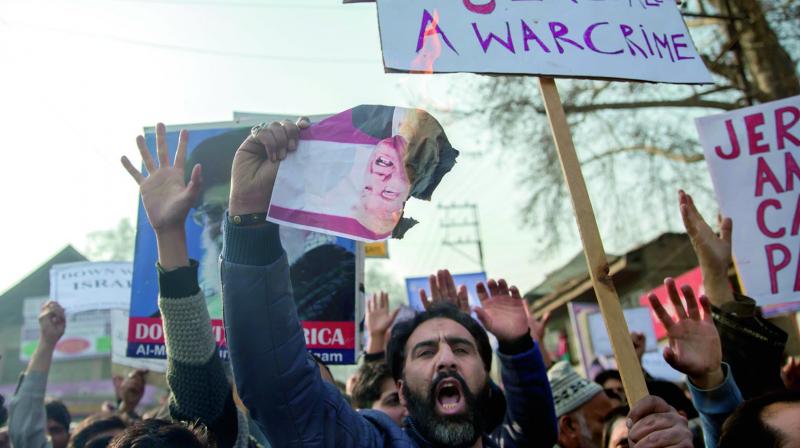 The victims, including four women, were alleg-edly surrounded and beaten up by a mob of 30-40 people on Thurs-day night. (Photo: AP/Representational Image)

New Delhi: A group of Kashmiris were allegedly thrashed by a mob in Southeast Delhi’s Sunlight Colony, following which the police launched a probe.

The victims, including four women, were alleg-edly surrounded and beaten up by a mob of 30-40 people on Thurs-day night. The victims alleged that they were targeted because they are Kashmiris.

“My sisters were abused and beaten up... It was a planned attack,” said one of the victims.

The attackers also rai-sed slogans like “Kash-miri terrorists go back”. He added that they had been attacked a couple of times earlier as well.

A video, in which a Kashmiri girl is being mercilessly beaten up by a mob in New Delhi, has emerged on social media.

“There are complaints from both sides. There were complaints earlier too. It seems to be more of a neighbour issue. A probe is on,” said a senior police official.

A neighbour gave a different version, saying one of the Kashmiri men “misbehaved with women” and the fight started because of it.

The woman, Sangeeta Tripathi, said: “A man from that family regularly misbehaves with women in the area. I lodged a complaint against him for molestation in December. Last night too, the man and his friends abused me and misbehaved.”

She claimed that she and other residents were carrying sticks because of a dog menace.

There are conflicting reports about the incident. Another report claims that one of the Kashmiri women was beaten up for feeding stray dogs.