Metros   Delhi  12 Jun 2018  ‘Will campaign for BJP if Delhi gets statehood’
Metros, Delhi

‘Will campaign for BJP if Delhi gets statehood’ 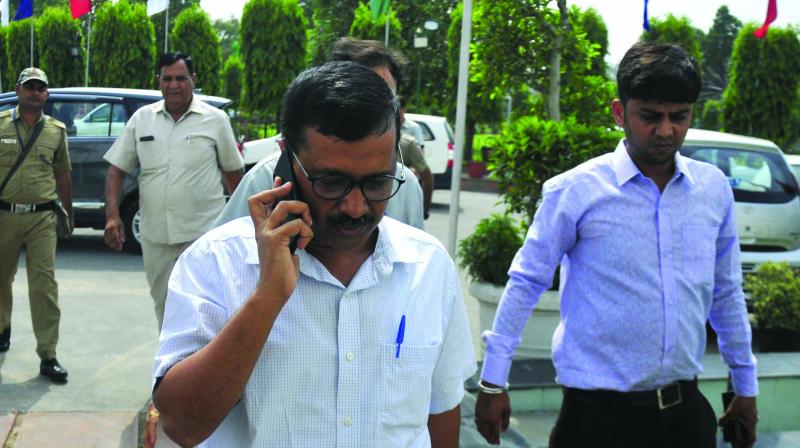 Speaking in the Assembly during a discussion on the government resolution for full statehood, he said if the Centre did not allow Delhi to be a full state, the people here would tell the BJP to leave the national capital. “Allow Delhi to be a full state before the 2019 general elections and we will ask people to vote for you (BJP) and each and every vote of Delhi will be for you, otherwise people of Delhi will say ‘BJP, leave Delhi’,” he said. The Delhi Assembly passed the resolution for full statehood for the national capital without any opposition as the AAP enjoys a huge majority in the House.

During his address, he used the term “Maharaj” (king) several times for the L-G. “The people of Delhi want to ask Modi ji what happened to their promise of giving full statehood to Delhi, or it was also a ‘jumla’ just like all other promises?”

“If Delhi becomes a full state, I will start 100 colleges and every one will have a job and a house. The city will be better than London, New York and Tokyo,” he added.

Late in the day, the chief minister and his cabinet colleagues met lieutenant-governor Anil Baijal on Monday evening and decided to stay put at his office till their three demands were accepted, including a direction to IAS officers to end their “strike” and action against officers who have struck work for “four months”.

Mr Kejriwal tweeted at 6 pm from the waiting room of the L-G office that a letter was handed over to Mr Baijal but he refused to take action.

“Handed him this letter. L-G refuses to take action. L-G is under constitutional duty to act. Left wid no option, we have politely told L-G that we will not leave till he acts on all points. We hv come out of his chamber n sitting in his waiting room (sic),” he tweeted. Mr Kejriwal, along with deputy chief minister Manish Sisodia and other  cabinet colleagues Satyendar Jain and Gopal Rai, met Mr Baijal and demanded that he direct the IAS officers to call off their “strike” and punish those who struck work “for four months”. He also asked the L-G to approve his government’s proposal on doorstep delivery of rations scheme.

However, lieutenant-governor Anil Baijal slammed the sit-in by Mr Kejriwal and his three colleagues at his office, calling it another “dharna without reason”, and alleged that he was “threatened” by the chief minister to summon officers at the Raj Niwas and end their “strike”.

In a statement, the L-G office said Mr Baijal told Kejriwal during their meeting that there was “no strike” by officers and advised the CM to build an “atmosphere of trust” and address the genuine concerns of the bureaucracy.