He could not walk due to poor blood flow. 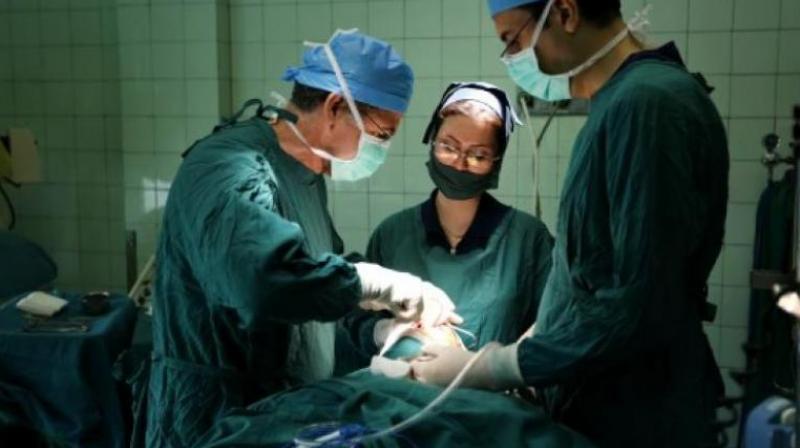 The MRI revealed an unidentified pelvic mass and hence the patient, Majid Nazir, was referr-ed to the Oncology department. A further CT scan and angiography revealed a big Cystic mass (fluid-filled) of 10 cm x 8cm. (Representational/AFP)

Mew Delhi: Doctors at a city hospital removed a cyst, which was around 1.5 times bigger than the size of a tennis ball, from the left abdo-men of a 28-year-old man.

The cyst had replaced his artery function and led to a decreased blood flow which gave him persistent pain in his left leg and he could not walk for more than a few metres without strain, the doctors at Max Super Speciality Hospital, Shalimar Bagh, where the patient was treated, said.

The MRI revealed an unidentified pelvic mass and hence the patient, Majid Nazir, was referr-ed to the Oncology department. A further CT scan and angiography revealed a big Cystic mass (fluid-filled) of 10 cm x 8cm.

The cyst had begun to press against his left femoral artery (present in the left thigh) and had led to a very feeble pulse. In fact, from the scans, it seemed that the cyst had replaced his artery function and led to a decreased blood flow.

“It was found that the cyst had been growing undetected in the patient’s body for nearly six years and was now full of multiple daughter cysts. Furth-ermore, the unusual location of the cyst — inside the Iliac vessel in the lower abdomen, and without any reactionary symptoms — had made detection difficult. The patient was in grave danger of losing a limb due to the restricted blood flow,” said Dr Rudra Prasad Acharya, Associate Direc-tor and Head, GI Surgical Oncology.

The daughter cysts were removed by a multi-disciplinary team of oncologists and cardiologists from inside Iliac artery that supplies blood to the lower limbs.

Then an artificial vessel was created through a vascular graft to replace the Iliac artery and re-establish circulation between the Aorta, the largest artery in the body, and left femoral artery in the thigh.

“This ensured that regular supply of blood is maintained to the patient’s limb, saving him from a potential loss of left leg,” said Dr Acharya. The surgery took place on May 18.