DUSU elections: As voting begins, here are poll promises being made

Voting began at 8:30 am at all morning colleges across DU, till 1 pm. For evening colleges, voting will be between 3 pm and 7:30 pm. 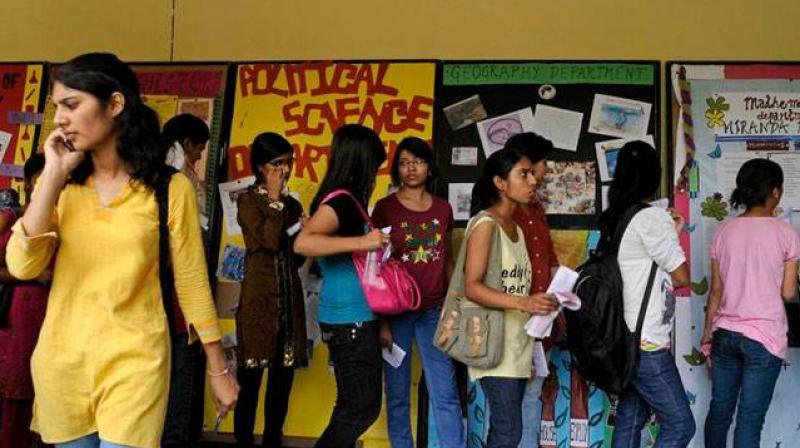 As many as 1.35 lakh students will cast their vote for 23 candidates standing for the DUSU polls. (Photo: File)

New Delhi: Voting has begun for the Delhi University Students' Union or DUSU elections at 52 centres in colleges across Delhi, an official said this morning.

As many as 1.35 lakh students will cast their vote for 23 candidates standing for the DUSU polls.

Senior faculty members have been posted as observers at the centres, and around 700 electronic voting machines (EVMs) have been installed, the official said.

Voting began at 8:30 am at all 'morning colleges' across Delhi University, and will end at 1 pm. For 'evening colleges', voting will be held between 3 pm and 7:30 pm.

While NSUI has promised the "Institute of Eminence" tag for Delhi University and meals for Rs. 10, the ABVP has promised to spend 50 per cent of the union's budget on women and social justice-related activities, along with a special attention to promoting sports and installing sanitary pad vending machines on college campuses.

After Aam Aadmi Party came to power in Delhi in February 2015, its students wing had unsuccessfully contested the DUSU polls. This time it has promised to ensure installation of CCTV cameras, setting up of police booths on campus, ending the "culture of hooliganism" and opposing commercialisation of education.

The results will be announced on Thursday. Last year, the elections saw a 43 per cent voter turnout.