The agitating MCD workers took their protest out onto the streets and denounced Delhi Chief Minister Arvind Kejriwal. 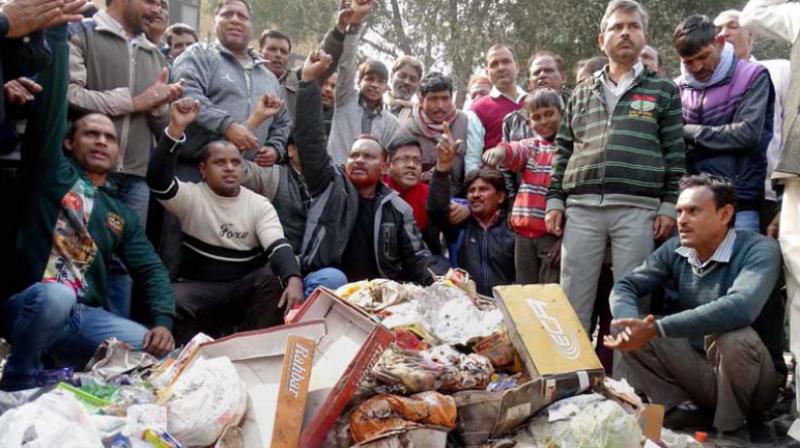 New Delhi: Continuing their strike for the ninth consecutive day in Delhi, Municipal Corporation of Delhi (MCD) workers on Friday vowed that the national capital will have to face the crisis until the Aam Aadmi Party (AAP) dispensation does not clear the dues of its employees.

The agitating MCD workers took their protest out onto the streets and denounced Delhi Chief Minister Arvind Kejriwal.

Displaying placards asking for implementation of the fourth finance commission a MCD worker said that the AAP government which is only concentrating towards Punjab is ignoring the issues pertaining to Delhi.

"Until and unless the fourth finance commission is implemented the national capital will face the crisis. The AAP government here does not want that the Bharatiya Janata Party (BJP) which governs the MCD is able to give salaries to its employees," said a protestor.

"None of the workers of our department have received their salaries from past two months. And it is clear that Kejriwal is not giving Delhi the due attention, his full attention is towards Punjab. We here protesting for our funds," he added.

The workers started protesting from January 5 and owing to their strike, a large amount of garbage has accumulated on the streets of the National Capital.

Meanwhile, the political parties have passed the buck and a fresh blamegame has begun over the issue.

The AAP said that it is the responsibility of the Centre to cater to the demands of the sanitation workers since the MCD functions under the Central government.

Whereas, the MCD which is governed by the BJP accused the Delhi Government for not releasing adequate funds to clear long pending dues of the sanitation workers.