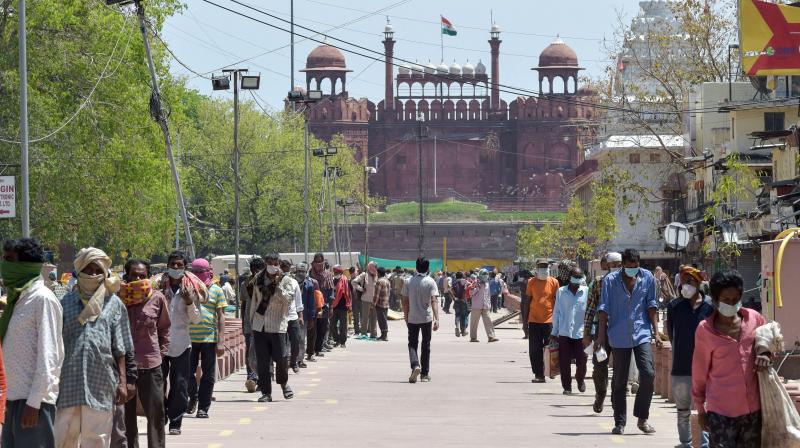 People stand in a queue to collect free food near the Shish Ganj Gurudwara in New Delhi on Sunday, April 12, 2020. (PTI)

New Delhi: As coronavirus cases in Delhi rose to 1,154 on Sunday, chief minister Arvind Kejriwal announced a massive sanitisation drive in the city’s containment areas. Eighty-five positive cases and five deaths were reported in the city in the past 24 hours.

In his digital press conference, Kejriwal said there would be a massive sanitisation drive in the containment areas (red zone) and the high-risk “orange zones” from Monday. The government will use 10 advanced Japanese machines and 50 Delhi Jal Board machines for the sanitisation drive.

Ten more coronavirus hotspots have been identified in Delhi over the last 24-hour period. Among them are East of Kailash, a posh residential colony in South Delhi, as well as places like Madanpur Khadar, Abul Fazal Enclave, Khadda Colony in Jaitpur Extension, Bengali Colony in Mahavir Enclave and Shera Mohalla Garhi.

The chief minister said Operation Shield carried out in the city -- entailing sealing of containment zones, home quarantine, isolation and tracking of patients, supply of essentials, local sanitisation and door-to-door checking — has been a success.

“No new case of Covid-19 has been reported in Dilshad Garden in the last 10 days due to Operation Shield. It will be implemented in all areas which have been declared as containment zones,” he said.

“I know people will face difficulties in these areas, but it is necessary to save lives,” he added.