After delays, Signature Bridge to open on October 31 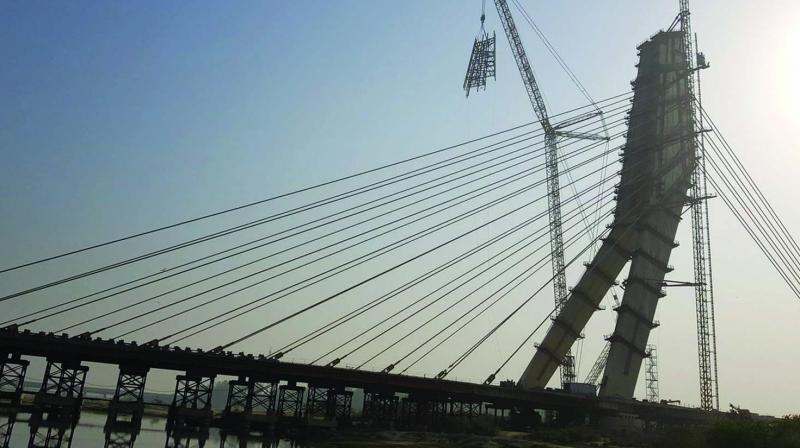 Work in progress on the Signature bridge

“The Delhi Cabinet cleared the proposal for the final payment for Signature bridge. Ninety-six per cent of the work is already completed. Now there should be no hurdles in opening the bridge by October 31,” Mr Sisodia tweeted.

The Delhi Cabinet in its meeting on Thursday, chaired by the chief minister Arvind Kejriwal, approved the public works department (PWD) final revised estimate of Rs 1,518.37 crore for completion of construction work of Signature bridge at Wazirabad over Yamuna river, and the approach road as recommended by the Expenditure Finance Committee (EFC).

The PWD also proposed that the project be completed as per approved scope of work within the scheduled period at the sanctioned cost. No cost escalation will be considered in future.

The Signature bridge project was approved in 1997 after an accident on the narrow Wazirabad bridge wherein a school bus fell into the Yamuna, killing 22 children. The completion of the bridge has been delayed by several years due to inadequate funds.

Even the project cost has increased from Rs 1,100 crore to Rs 1,575 crore, which has become a cause of concern for the PWD. The PWD has so far released Rs 1,244 crore.

The project was conceptualised in 2004 and was approved by the Delhi Cabinet in 2007. The first deadline was fixed ahead of 2010 Commonwealth Games, but was later revised to 2013.

The project deadline was again pushed to June 2016 and then to July 2017, which was later extended to December 2017.

The 675 metre-long and 35.2 metre-wide bridge will be the first asymmetrical cable-stayed bridge in the country, which will connect Wazirabad across the river Yamuna.

The Signature bridge, once completed, will take vehicular pressure off the existing Wazirabad bridge. Also, the bridge will connect the Outer Ring Road on the western bank of the river with Wazirabad Road on the eastern side.