For most schools, mid-day meals are a ‘burden’

67 vendors supply meals to different govt schools across the capital. 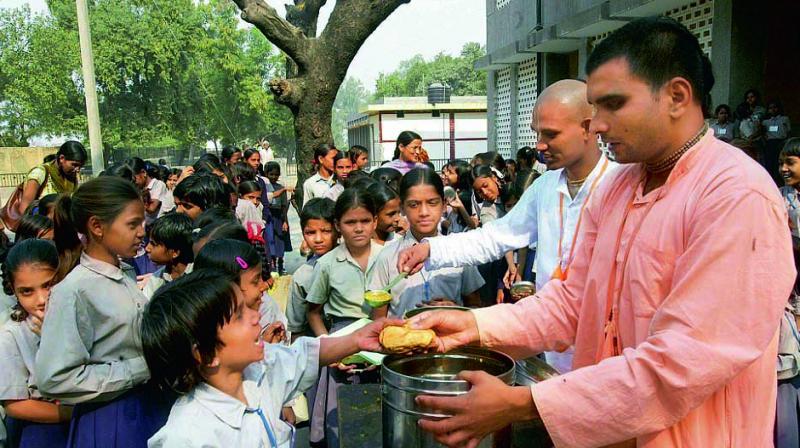 Daryaganj-based HMDAV senior secondary school principal R.K. Tiwari pointed out that the schools take the mid-day meal scheme as a burden rather than a responsibility.

New Delhi: The mid-day meals served in government and MCD-run schools lack the basic necessities — hygiene, proper care, and quality. At present, there are about 67 vendors supplying meals to the different schools across the city.

Daryaganj-based HMDAV senior secondary school principal R.K. Tiwari pointed out that the schools take the mid-day meal scheme as a burden rather than a responsibility. “The schools should take the government initiative seriously rather than taking it as a burden. It should make the children aware of the benefits of having healthy food.”

Mr Tiwari said that the school was feeding around 300 students under this project. Ujjwala Savera Samiti, an NGO, prepares the food for the schools in Daryaganj. Also, he informed that the food is always tasted before being served.

“Once the food was sent back to the NGO because it was not meeting standards,” he added. Students of SSK Khalsa Girls Senior Secondary School in Daryaganj complained that the mid-day meals tasted real bad. The scheme of serving mid-day meals was an initiative by the Union government to improve the nutritional standards of school children and also the attendance.

Questions have been raised time and again over the quality of the food. A student had spotted a lizard in the food container and the teacher turned a deaf ear to her complaint. An official from Premchand Rajkiya Sarvodaya Bal Vidyalaya said that they serve mid day meals from KG to Class 8 students.

The official added that the ministry of human resource development decides the menu for the financial year.

Officials of a school in Mayur Vihar said that around 487 students are fed daily under this initiative.  At first, the food is tasted by the committee of eight members and then it is served. He added the rice sent by Food Corporation of India (FCI) to these NGO was of poor quality. The diet chart planned by MHRD for this year contains aloo puri, dal chawal (arhar and chana), daliya and kadhi chawal.