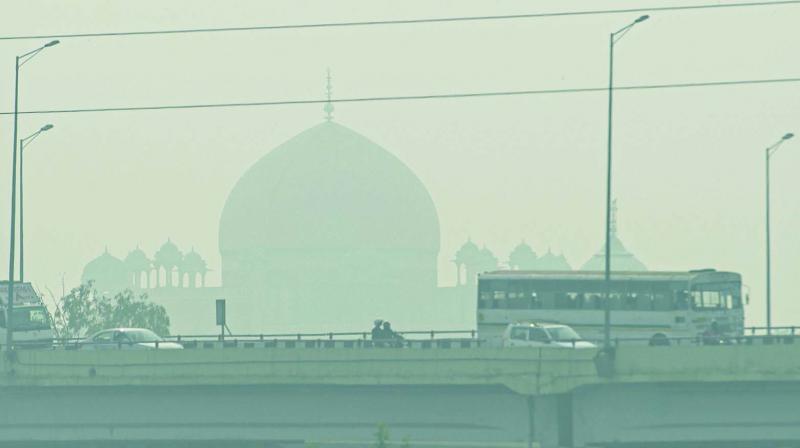 New Delhi: The noxious haze returned to Delhi and its suburbs on Tuesday due to raging farm fires in neighbouring states, a fall in temperature, and the wind speed.

The government’s air quality monitor, System of Air Quality and Weather Forecasting and Research (SAFAR), said pollution levels in Delhi-NCR are expected to enter the “severe plus” or “emergency” category on Wednesday.

Weather experts said that the national capital recorded a minimum of 11.7° Celsius — the season’s lowest so far—on Tuesday morning. It is two notches below normal for this time of the year.

“A dip in the wind speed and temperature makes the air cold and denser, leading to accumulation of pollutants,” said Kuldeep Srivastava, the head of the India Meteorological Department’s (IMD) regional weather forecasting centre.

Most of the 37 air quality monitoring stations across Delhi recorded air quality in the “severe” category.

Incidents of stubble burning in Haryana and Punjab have increased and northwesterly winds have been bringing more farm fire plume to the Delhi-NCR region, they said.

Stubble plume intrusion is expected to increase and a decrease in surface wind speed over the Delhi region is predicted for the next two days.

According to the government’s air quality monitor, SAFAR, the share of stubble burning in Delhi’s pollution is predicted to be 25 per cent on Tuesday, up from 18 per cent on Monday.

Pungent smog lingered over Delhi-NCR for around a week after Diwali as a result of emissions from firecrackers, stubble burning, and unfavourable weather.

A Supreme Court-mandated panel declared public health emergency as air pollution neared the emergency levels on November 1 and the administration ordered closure of schools till November 5.

The top court had also ordered that all farmers be given `100 per quintal incentive to prevent them from setting their fields on fire in preparation for the next crop and provide them with free machines to get rid of the agricultural residue.

Despite a ban on stubble burning in Punjab and Haryana, farmers continue to defy it amid lack of financial incentives.

State governments are providing 50 to 80 per cent subsidy to farmers and cooperative societies to buy modern farm equipments for in-situ management of paddy straw. However, farmers say that use of machines increases the input cost manifold.

According to an affidavit filed by the Centre in the Supreme Court, Haryana and Punjab distributed around 63,000 machines to farmers during 2018-19. In 2019-20, as many as 46,000 machines have been distributed.