Amid sloganeering of “Bharat Mata ki Jai”, the residents distributed sweets among each other to celebrate the occasion. 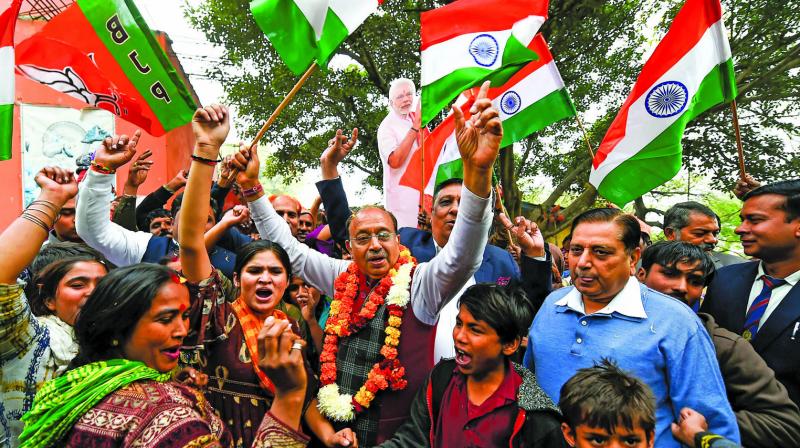 New Delhi: With Citizenship (Amendment) Bill being passed in the Upper House of Parliament on Wednesday, the Pakistani Hindu refugees staying at the Majnu ka Tilla were overjoyed and excited at the prospects of getting Indian citizenship after the Bill becomes an act with the consent of President Ram Nath Kovind.

Large number of these immigrants hailed the Central government for passage of the bill and greeted thanked Prime Minister Narendra Modi for the same.

Amid sloganeering of “Bharat Mata ki Jai”, the residents distributed sweets among each other to celebrate the occasion. “We are really happy with this decision. It is like we have taken a new birth here. We are extremely grateful to Modi for the decision,” said a refugee.

A woman refugee stated that the kindness shown by Modi will not be forgotten. “We want other Pakistani Hindu citizens to also come to India to celebrate this occasion,” said another woman.

BJP Rajya Sabha member and former president of party city unit Vijay Goel on Thursday joined the 200 Hindu refugee families living at Majnu ka Tilla since the last 10 years to celebrate the new law. Celebrating the passage of bill with drums, sweets, and garlands, Mr Goel said that PM Modi has given a new life to the Hindu refugees with the passage of this bill and now they will be able to get Indian citizenship.

“With the passage of this bill, persecuted Hindu, Jain, Sikh, Christian, and Parsi minorities from Afghanistan, Bangladesh, and Pakistan will get Indian citizenship. The bill will become law with the President’s assent, but sadly Congress is planning to challenge it in the court. This is despite the bill being passed by the Parliament,” he said.

Mr Goel slammed the opposition parties for misleading the country and portraying it to be anti-Muslim. “I had a word with the Muslims of Chandni Chowk, who said that they will not be misled. This bill is not affecting the rights of Muslim citizens of India nor is it depriving them of their rights,” said former Delhi BJP president.

According to Mr Goel, a refugee woman, Veeva, from Pakistan’s Sindh province told him that she didn’t have any rights in Pakistan, they didn’t have religious freedom and could not celebrate their festivals. Their temples were destroyed too. “A woman named Seeta said that they were forced to convert to Islam. Another refugee, Seetaram, told me that their women are not safe there. There is always a threat of rape. A lot of their family members are in Pakistan, who are not being allowed by the Pakistani government to move to India,” said Mr Goel.