Banerjee received a huge cheer from the massive crowd at Jantar Mantar. 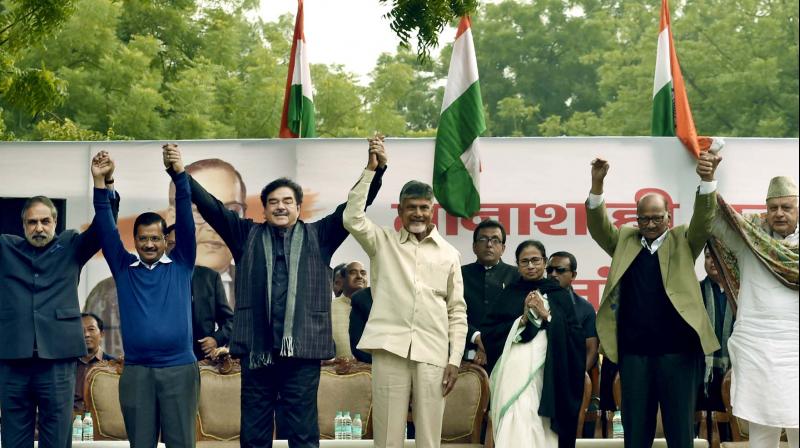 Opposition leaders, including West Bengal chief minister Mamata Banerjee, slammed the BJP as a “threat to democracy” which must be defeated in the coming general elections. The rally has been organised nearly three weeks after Ms Banerjee hosted Opposition leaders in Kolkata in a similar show of strength on January 19. Ms Banerjee received a huge cheer from the massive crowd at Jantar Mantar.

Addressing the rally, Delhi chief minister Arvind Kejriwal hit out at Prime Minister Narendra Modi, alleging he is trying to tear apart the Constitution and destroy democracy. On a day when the CAG report on the 2015 Rafale fighter deal was tabled in Parliament, Mr Kejriwal said Mr Modi should speak the truth on the agreement between India and France because, as Prime Minister, he is accountable to the nation.

Referring to the controversy over the visit of a number of CBI officials to the Kolkata police commissioner’s residence in connection with its probe into chit-fund cases, Mr Kejriwal said sending “40 CBI officers” from Delhi was an attack on the elected government of West Bengal. He also alleged that the Modi government has “captured” the Anti-Corruption Beaureu in the last four years. “Who dreams of capturing Delhi and Kolkata? The Prime Minister of Pakistan,” Mr Kejriwal said sarcastically.

The Delhi chief minister stated that PM Modi is acting like a Prime Minister of Pakistan and not of India because he wants to capture state governments run by non-BJP parties. He is trying to control all the agencies (CBI, ED, Income tax). “We defeated BJP and Congress in 2014. I request people to save the country and do not look at the party and continue to fight against the Modi government. He also questioned Mr Modi on Rafale deal.

Senior Congress leader Anand Sharma also attended the rally. Earlier Congress’ presence was not confirmed. There were talks of an alliance between the AAP and the Congress for the Lok Sabha polls in the national capital, but the AAP leadership is believed to be against it.