The bypoll results assume significance as the three parties are going to face the crucial civic polls on April 23. 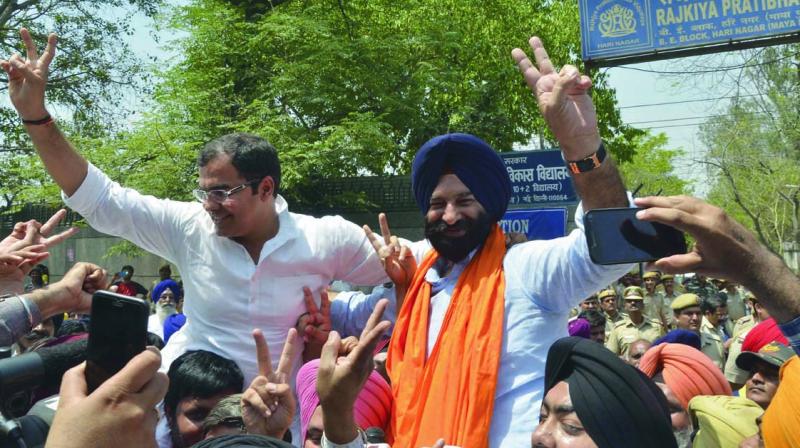 New Delhi: The BJP registered a massive victory in the Rajouri Garden Assembly bypolls on Thursday, defeating the ruling Aam Aadmi Party (AAP), which finished a distant third and even lost its deposit.

The bypoll results assume significance as the three parties are going to face the crucial civic polls on April 23.

Congress’ Meenakshi Chandela finished second with 25,950 votes while, AAP’s Harjeet Singh managed to get only 10,243 votes, less than one-sixth of the total votes polled.

After the victory, Delhi BJP president Manoj Tiwari said, “The bypoll results show there is a high Modi wave. Arvind Kejriwal should now understand that it is not EVM but people who give verdict in a democracy. It is a day when people have strongly rejected a fascist Tughlaqi-rule Kejriwal,” he said. With this victory, the number of BJP legislators in Delhi Assembly has gone up to four. In the 2015 Assembly polls, the AAP had won 67 seats out of total 70. The Congress does not have any presence in the House.

The party had swept Delhi with 67 out of 70 seats in the assembly elections in 2015 and is attempting to wrest all three municipal councils in Delhi from the BJP. The result came as a blow to AAP plans to win all the three civic bodies.

The AAP denied that the result could have an impact on the MCD polls.

In terms of vote share, the Congress staged a revival by getting around 33 per cent of the total votes cast, an increase of 21 per cent over the 2015 Assembly polls. Around 47 per cent of the 1.6 lakh electors of West Delhi seats cast their vote on April 9.

Senior Congress leader Jairam Ramesh on Thursday said the Congress’ first aim was to decimate the AAP in Delhi, which is “evident” from the Rajouri Garden bypoll result, and it will also do the same to the BJP in municipal polls.