Metros   Delhi  14 May 2017  A faded glimse into Chandni Chowk’s glorious past
Metros, Delhi

A faded glimse into Chandni Chowk’s glorious past

Chunnamal ki Haveli in Katra Neel area is the only building that is still occupied. 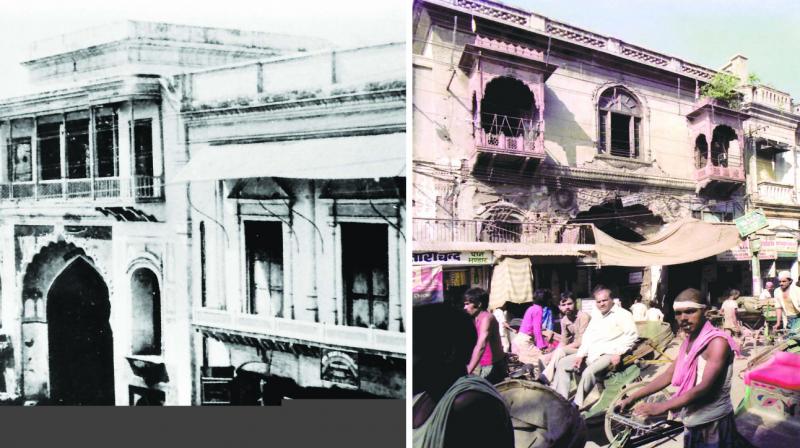 New Delhi: In a dusty lane in Chandni Chowk, tucked amid bustling little shops, is a house where time keeps its date with history. And the pulse of a faded, glorious era still beats.

Once one of the grandest houses in the then most elite part of town, Chunnamal ki Haveli in old Delhi’s Chandni Chowk is now a pale shadow of its former magnificent self. The surroundings are cramped, the façade nondescript. But climb a few steps, and a beautiful old baroque mirror gives you a glimpse of its lost splendour.

Chunnamal ki Haveli in Katra Neel area of Chandni Chowk is the only haveli in the city still occupied by descendants of the original owner. Mr Anil Pershad, the sixth generation descendant of Rai Lala Chunnamal, resides here with his wife, two sons, daughters-in-law and grandchildren.

The sprawling haveli, which originally had 128 rooms, has a large courtyard at the center that opens up to a grand drawing room with huge mirrors, fireplaces on either side, ornate candelabra, antique chandeliers, a high ceiling, and beautiful carved furniture. The designs of the furniture have stayed unchanged over the decades, and been replicated every few years. “All my visitors are brought to this room,” he says.

Built on three floors, the haveli dates back to the Mughal era when Lala Chunnamal, a wealthy textile merchant and first municipal commissioner of British India, acquired it after 1857 and got it constructed in parts. Anil Pershad and his family occupy just 10 per cent of the haveli, with the rest of the rooms belonging to family members who have moved out being kept locked.

The ground floor, originally meant to host grand functions of the family, was rented out in 1971 to shop owners and has since been used for commercial purposes. The first floor has a large courtyard and the rooms currently occupied by the family. The courtyard was once also used for hosting elaborate, opulent weddings. Though time and disrepair have left their mark on the place, it still retains its architectural beauty and aura of grandness.

Saddened by the fact that the heritage building is losing its charm, Mr Pershad rues the lack of support from the government in preserving it. “Whatever I am doing is solely in my personal capacity. The facade has really deteriorated. When you stand outside, you don’t know you are standing in front of a haveli. Even if I want to start maintenance work, there is no single authority to give permission.

Some or the other construction keeps happening in the shops below and it is weakening the building,” says Mr Pershad, adding that he has written to North Delhi Municipal Corporation several times but to no avail. Talking about Haveli Dharampura, which was restored by MP Vijay Goel, he asks, “Has the government refurbished any haveli and set any example till date?”

The plan to restore havelis has drawn an unenthusiastic response from the government so far. Not very far from Chunnamal Haveli is Mirza Ghalib’s Haveli that was long neglected and encroached by squatters till recently when it was restored. Now a herita
ge site, it is said that Ghalib wrote some of his finest ghazals here. However, it is not being maintained properly even after the restoration.

“It is not befitting Ghal-ib’s standard and the government is not taking good care of it unlike in the West where they spread awareness and maintain such historical places, like the Shakespeare museum,” said Mr Pershad.

Similarly, nothing is left of Zeenat Mahal in Lal Kuan, except two arched gates with wires hanging over it. The palace was constructed in 1846 by the order of Zeenat Mahal, wife of the last Mughal emperor Bahadur Shah Zafar. It is said that residents would congregate near the gates to greet the empress when she entered or came out of the haveli. While some parts have been encroached by vendors and turned into shops, another section houses a government girls school.

Ghalib ki haveli is a known landmark in Chandni Chowk but there are several other such neglected gems tucked away in corners of old Delhi that draw no visitors for lack of awareness. For example, Haksar ki Haveli in Sitaram Bazar, said to be the home of Jawahar Lal Nehru’s in-laws and the place where he was married to Kamla Nehru, is in ruins.

Next to nothing survives of it and one would really have to challenge one’s imagination to recreate a scene from the days when it enjoyed its opulence. Barring two or three people in the lane where it is located, nobody seems to be even aware of its existence. It has been sold to a local distributor who now plans to turn it into a commercial property.