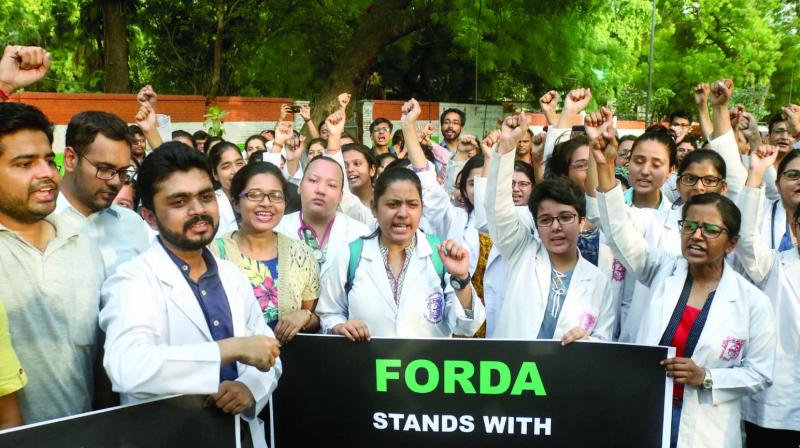 Resident doctors of AIIMS during a protest in New Delhi on Thursday. (Photo: Pritam Bandyopadhyay)

New Delhi: Healthcare services at private and government hospitals in the national capital are likely to be affected on Friday with scores of doctors deciding to boycott work for a day to express solidarity with their protesting colleagues in Kolkata.

There will be a complete shutdown of all out patient departments (OPDs), routine operation theatre services and ward visits, except emergency services in the hospitals, several medical bodies of the city have said.

Resident doctors at the AIIMS and Safdarjung Hospital here worked with bandages on their heads in a symbolic protest on Thursday and called for suspension of all non-emergency services, including OPD, on Friday to protest against the violence in Kolkata. Several resident doctors also held a protest at Jantar Mantar against the brutal attack.

Condemning the violence in West Bengal, the AIIMS Resident Doctors’ Association (RDA) has also urged the RDAs across the country to join the token strike. In a statement issued on Thursday, the AIIMS RDA said the ongoing and worsening violence against medical doctors in West Bengal is worrisome and disheartening.

“There is a complete breakdown of law and order, with reports of mobs attacking doctors’ hostels with weapons,” the statement read.

“AIIMS RDA condemns this in words and in spirit. Residents across the country are deeply hurt by these turn of events. Keeping in view of our commitment towards safe and non-violent working environment for residents, AIIMS RDA stands in support of our colleagues in West Bengal and has decided to hold protest on June 13 with a day’s strike of work on June 14, which include OPD, routine, and ward services except for emergency services,” it said. They urged the West Bengal chief minister to intervene in the matter and address the security concerns so that residents can continue serving patients.

The Indian Medical Association (IMA), on Wednesday, directed the members of all its state branches to stage protests and wear black badges on Friday. In a communique to all its state presidents and secretaries, the IMA has asked them to organise demonstrations in front of the district collectors’ offices from 10.00 am to 12 noon on Friday and hand over a memorandum, addressed to the Prime Minister, to the collectors in every district.