Its rival, the Delhi Metro, is often visible running on a concrete bridge over the track on which the ring rail operates. 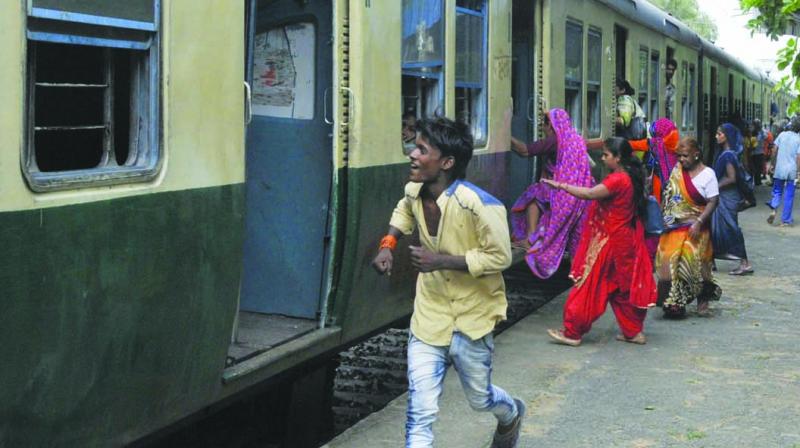 'Dilli ki local,' the Ring Rail or Delhi Suburban Railway, is still a means of communication for the economically-backward.

New Delhi: The dreary look of the train reveals its age. It, however, carries a comparatively younger generation.

‘Dilli ki local,’ the Ring Rail or Delhi Suburban Railway, which has been abandoned by most of the Delhiites, is still a means of communication for the economically lower class. Not much known amongst the youth now, it is a suburban rail service operated by Northern Railway for the National Capital Region (NCR).

Surprisingly, only 10 trains operate on this network. It has a ridership of 5.000 passengers per day. It is occasionally behind schedule and folks who are not in a rush, unlike Metro passengers, travel via this network.

It lost its relevance with the emergence of new and better modes of mass transportation, like the Delhi Metro. Though, last year, Union railway minister Suresh Prabhu had promised to revive the network, no visible improvement has been witnessed.

Its rival, the Delhi Metro, is often visible running on a concrete bridge over the track on which the ring rail operates. However, it has already been defeated due to uncertain timings, improper sanitation, poor connectivity, security issues, and absence of air conditioners.

This correspondent managed to board the train on day two, after enquiring the time schedule the previous day, since one cannot take a round trip if the morning trains are missed.

“You don’t have to board the train from this platform. I’ll guide you to the other side. Come with me,” said the gentleman who works at the ticket counter. He has been working here for 3 years. “Don’t worry, more people will be here by 9,” he comforted.

Hiding somewhere in between trees and shrubs, the Sarojini Nagar railway station is adjacent to a parking lot.

“Not many people come here — some of us who work at the railway station and few labourers. Mischievous kids also turn up sometimes to smoke cigarettes and beedis after bunking school,” said a man, who works at Hazrat Nizamuddin railway station.

Within a couple of minutes, more people started surrounding the bench. A group of friends gossiped among themselves.

“The train is about to arrive, I received a call just now,” exclaimed a woman, who works at the Hazrat Nizamuddin railway station. The train was unexpectedly filled with common faces. Most of them were traveling without tickets. Mischief makers hopped on to the train and got down at the next station. The view from the train was very misleading. Sometimes it showed the Delhi one has never seen and sometimes the Delhi one sees every day.

Child beggars were heading to exercise their daily piece of work — all cheerful and sparkling, unlike the others. They were armed with dholaks. They looked similar to the ones who are often seen at the traffic signals.