General secretary Ravinder Gupta said that government has stalled the development of the city and disappointed the people. 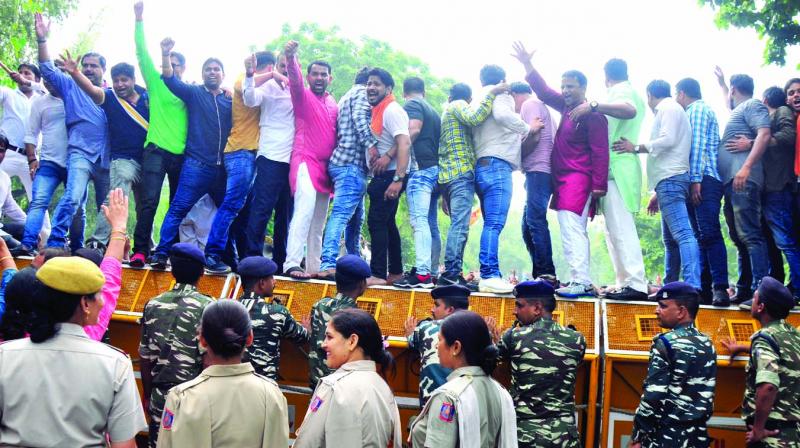 New Delhi: Delhi BJP on Friday staged a protest outside chief minister Arvind Kejriwal’s residence over his failure to provide adequate drinking water and power to the Delhiites in the past three-and-a-half years. Manoj Tiwari, Delhi BJP chief, led the protestors.

Addressing the workers, Mr Tiwari said that today the Delhi government is like Mahatma Gandhis three monkeys insensitive towards people facing various problems. “Solving any problem is not a part of Mr Kejriwal’s character rather creating controversies for political gain on every problem is part of his character,” Mr Tiwari added.

Mr Tiwari alleged that the present Kejriwal Government is the only Government in the history under whose rule a bottle of water is more precious than the life of human being. “One can easily get a glimpse of naxalism, anarchism and unconstitutional behaviour under Kejriwal Government which has ashamed Delhi in the entire country and the world. The people of Delhi are completely disappointed with Kejriwal Government because it has completely failed to provide water, power, health, transport services and in making transparent administration and now this corrupt anarchist and insensitive government must come to an end,” said Delhi BJP president.

“After watching the behaviour of the Chief Minister one can say that when this Government talks about more powers then these powers are not meant for the service of the people but for arbitrariness,” Mr Gupta added.