The area is evolving as one of the largest production hubs of embroidery clothing in North India. 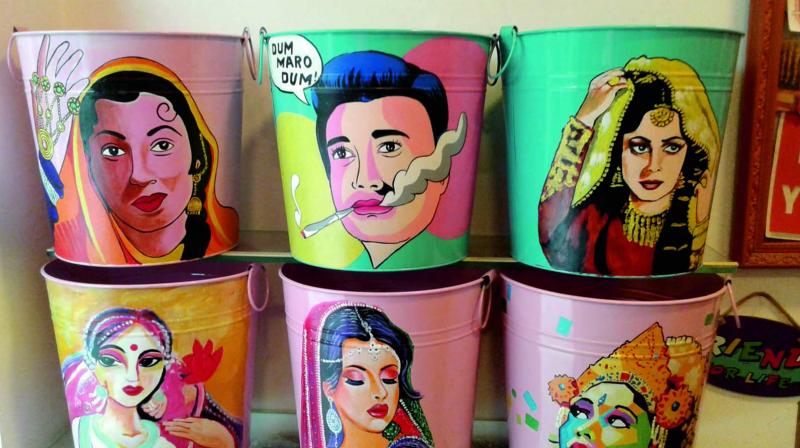 Fancy buckets for sale at a store in Shahpur Jat. (Photo: Asian Age)

New Delhi: Shahpur Jat village has emerged as a popular fashion destination in the capital. Witnessing an increased footfall in the last few years, top designer showrooms to shops selling handmade articles and various cafes jostling for space in Shahpur Jat that is becoming a new happening place in Delhi.

The area is evolving as one of the largest production hubs of embroidery clothing in North India. Located close to Hauz Khas, the market has been established within the remnants of the Siri Fort. The village practically thrives with handicraft, weaving, creativity, craft, and many skilled craftsmen.

In recent times, the market has become a popular visiting site for both Delhiites as well as foreign tourists. To cater to customers, the shop owners are going on online portals. Shopkeepers of the area have registered themselves with e-commerce websites like Amazon and Flipkart.

One of the famous streets of the market is Dada Jungi house lane which is full of designer showrooms. The intricately designed dresses range from Rs 6,000 to Rs 2 lakh. One of the designers said that the quality of fabric used and the intricate designs of the dresses make them expensive.

Alisha Bhasin, who owes a shop of hand-painted articles, said in the last six years, Dada Jungi House has seen a good amount of customers. Ms Basin deals in hand painted articles like bags, frames,trays, shoes, and tea coasters which are designed by her. She also sells customised products across India and even exports them to various countries.

At present, this historically rich place is attracting a lot of upscale designers and foreigners who are inclined to move to Shahpur Jat, as it has relatively low rents and an interesting lifestyle.