ABVP bagged three posts, including that of president, in Delhi University Students Union elections while NSUI won one seat. 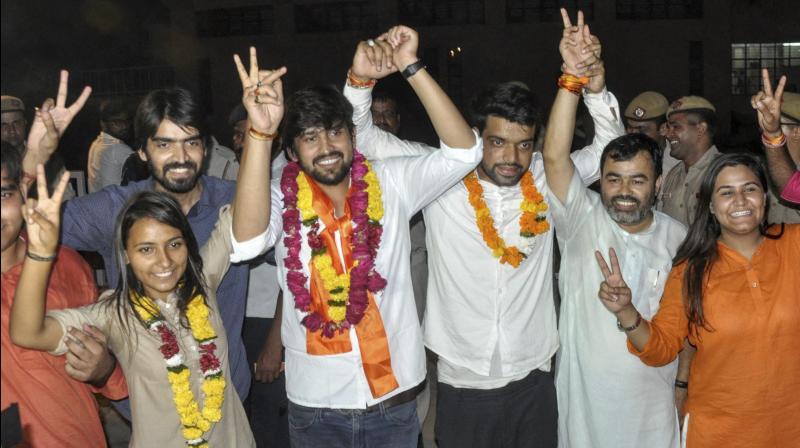 New Delhi: The Akhil Bharatiya Vidyarthi Parishad (ABVP) candidates who won the Delhi University Students' Union (DUSU) elections on Thursday celebrated their victory and vowed to fulfill the promises made in their manifesto even as the sole National Students' Union of India (NSUI) winner alleged cheating in the results.

The ABVP, the student wing of the Rashtriya Swayamsewak Sangh, on Thursday bagged three posts, including that of the president, in the Delhi University Students Union (DUSU) elections.

The NSUI, the student wing of the Congress, won only one seat.

ABVP's Ankiv Basoya won the presidential post with a margin of 1744 votes while party's candidate Shakti Singh was declared as the vice president after he won with a margin of 7673 votes. NSUI's Akash Choudhary won the secretary's post while ABVP's Jyoti emerged victorious on the joint secretary post. Basoya got 20467 votes while his rival NSUI's Sunny Chhillar got 18723 votes. Singh received 23046 votes against NSUI rival Leena's 15373 votes.

Ankiv Basoya, is pursuing MA in Buddhist Studies. He has been associated with ABVP since 2015.

"Our election manifesto said we would dedicate 50 per cent of the DUSU budget to women safety, so I will now work towards making the campus safer for women," he said.

"Our party has worked for the welfare of students and we will continue to do so," Basoya added.

Shakti Singh, who won the vice-president's post, is a national-level boxer and was the only candidate to have not done his graduation from the varsity. He completed his graduation from MIT Pune and is studying law at the Delhi University's Faculty of Law.

"Since I am a sportsperson, I will work towards promoting sports culture in the university. We'd also mentioned about promoting sports in our manifesto. This win indicates the country's students are with the ABVP," he said.

NSUI's Aakash Choudary, who won the post of secretary, was the union president of Sri Aurobindo College where he did his graduation. He is currently pursuing law.

"This victory has been possible because of the students' love for me. I was also the president of Aurobindo College due to the love of students," he said.

"Seven EVMs were not taken into consideration while counting and we want them to reveal the data of those EVMs," he said.

ABVP's Jyoti Chaudhary, who won the post of joint secretary, completed her graduation from Vivekananda College and is currently pursuing MA in Buddhist Studies.