‘It is not easy’ for 19-yr-old ahmed noor, a ragpicker working in Delhi

Ahmed came to Delhi after his father left his job as a plumber. His family is from a district on the border of Bengal and Assam. 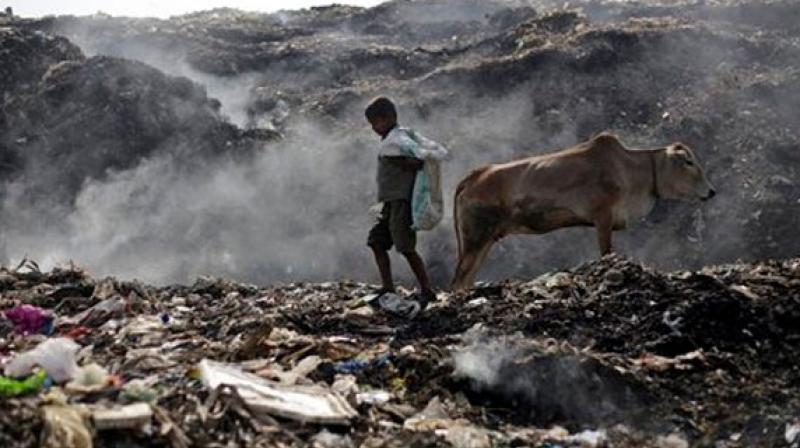 New Delhi: Ahmed Noor, a 19-year-old, wades through mounds of garbage, collecting plastic and metal scraps in South Delhi, rather than going to school and living the life most teenagers are used to. The irony is that this work invites no appreciation.

Delhi is home to more than one lakh ragpickers and collectors, who live life on the edge, ignored and exploited by everyone. Apart from health hazards of solid waste, which includes soiled napkins and diapers, ragpickers have to fight their way through a hierarchy of contractors to be able to “manage” their streets.

Ahmed wakes up early on all days, except Sundays, to earn a living and feed his empty stomach. Sometimes, Ahmed has to wake up even before 6 am.

He rides a bicycle with an attached cart from Madanpur Khadar to Jangpura in South Delhi, where he works.

Ahmed came to Delhi after his father left his job as a plumber. His family is from a district on the border of Bengal and Assam.

“It is not easy,” he says. “Bhaut jhamela hai, MCD contractors se deal hai. Saara paisa to unko chala jata hai (There is too much trouble. The MCD has to be kept in the loop. All the money goes to them).”

He has an arrangement with one of the sweepers appointed by the Delhi civic body. The sweeper lets him pick garbage from six lanes in the colony. As part of this arrangement, the sweeper takes most of the money Ahmed gets from garbage collection. This usually ranges from Rs 100 to Rs 200 per month, leaving him with no more than Rs 50 a month.

Ahmedalso has to pick out the plastic and metal scraps from the waste he collects. The organic waste is a liability that he drops of at the dhaloa.

The plight of ragpickers like Ahmed is in stark contrast to the aim of the Swachchh Bharat initiative of ensuring a decent living for everyone.