Why is the capital city so dirty? 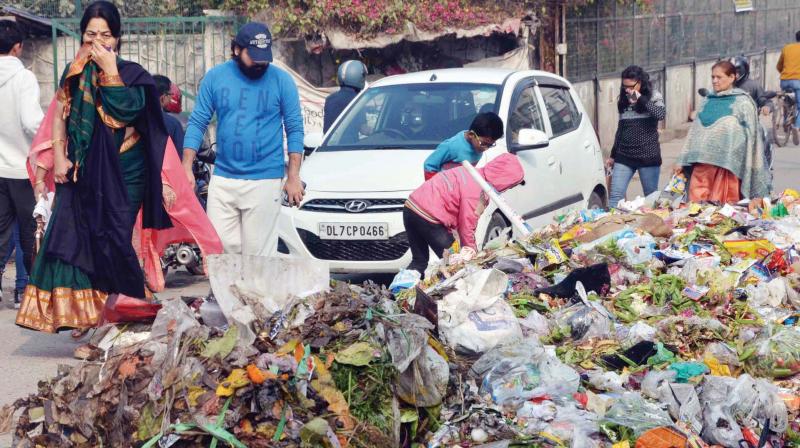 New Delhi: Not very far from the power corridors of the capital, where Prime Minister Narendra Modi’s brainchild Swachchh Bharat Abhiyan saw the light of day, lie the overly saturated, stinking, simmering landfills. The solid waste situation in the capital has swiftly moved from being a non-issue to a crisis. The capital generates around 9,000 tonnes of waste. The figure is not an astounding one for a metropolitan city, but the bone of contention is the treatment of this waste.

It is interesting to note that out of this mammoth amount, 60 per cent of the waste is organic — which essentially means that it can be treated at home. The problem, as per the experts, is when the waste reaches the landfills. Delhi has three such sites, now turned into man-made mountains of garbage. Bhalswa landfill site in North Delhi is the newest addition to the city’s garbage dumps. In operation since 2011, the site was added to two others that long ago reached full capacity — Ghazipur in the East and Bawana in Outer Delhi.

The missing link in the Delhi garbage story is threefold. The first being ignorance — both at the end of the people and administration. Second is space issue and third is the ever-growing population. The 24 million residents in the capital produce 65 per cent of the waste. Experts clearly say the onus of Delhi heading for a waste crisis is due to the lax attitude of the residents. “The problem starts after the waste is left to be dumped at the landfill sites,” says Ravi Aggarwal, director of Toxic Link.

The ignorance part of the chapter is one that needs to be addressed. There is zero segregation of waste in the capital. To put this in perspective, it means that all kinds of waste — hazardous, organic and toxic — are being mixed with each other. This leads to waste being a health hazard, not only for those who deal with it but also a potential disaster waiting to happen. The waste produced in the city has increased twofold, its numbers capped at 4,000-5,000 tonne for a good two decades.

Unplanned usage of landfill sites is another area of concern. The three landfill sites in the national capital are not designed as per specifications mentioned in the Solid Waste Management Rules, 2016. As per guidelines, these sites should have a gas-controlling system installed, but only the Ghazipur landfill has one. There needs to be an ambient air quality check system installed in all the sites.

According to the Master Plan for Delhi, 2021, these landfill sites had already exceeded their capacity way back in 2008.

Some see waste-to-energy technology as the next step to tackle the crisis since experts and the Solid Waste Management Rules, 2016, have ruled out landfills as being the sole solution. But does the waste simply burn and vanish? The answer is no. The green tribunal has been hearing a petition filed by the Sukhdev Vihar Residents Welfare Association, demanding the closure of a waste-to-energy plant. The residents allege that the plant uses illegal mass-burning technology that causes air pollution. However, the plant is still up and running, with no intervention from even the green tribunal.

Crusaders of the cause claim that innovation and efforts at the local level can help address the situation — foremost being segregation of all kinds of waste produced at homes.