abherwal, in his tweet, tagged mayors of all the three municipal corporations of the city. 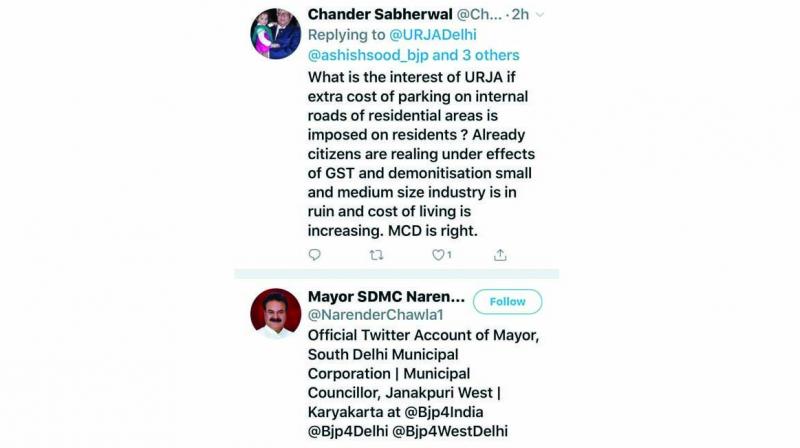 A senior party functionary told this newspaper that Mr Chawla’ act embarrassed party and an explanation will be sought from him.

NEW DELHI: While Prime Minister Narendra Modi and the BJP leadership list demonetisation and GST as major achievements of the NDA government, senior party leader and mayor of South Delhi, Narender Chawla takes a different stand. Mr Chawla liked a tweet which criticised both the key initiatives as reason behind the suffering of citizens.

On February 13, URJA once again tweeted, “Why are all Hon’ble Councilors silent over this? Who is affording the generosity of 2/3 MCDs which claim perennial shortage of funds? Why throw away a revenue source? On whose charity is free parking being offered?”.

Later in the evening, one Chander Sabherwal tweeted: “What is the interest of URJA if extra cost of parking on internal roads of residential areas is imposed on residents? Already citizens are reeling under effects of GST and demonetisation, small and medium size industries are in ruin and cost of living is increasing. MCD is right”. Mr Sabherwal, in his tweet, tagged mayors of all the three municipal corporations of the city. But Mr Chawla agreeing with Mr Sabherwal’s comment is embarrassing.

A senior party functionary told this newspaper that Mr Chawla’ act embarrassed party and an explanation will be sought from him. “Few months before the Lok Sabha polls, in which both GST and demonetisation will be an issue, Mr Chawla should have controlled his emotions. He will be asked to explain the reason behind doing this,” he added.