The river had crossed the danger mark on July 28 after parts of northern India, including Delhi, witnessed heavy rains. 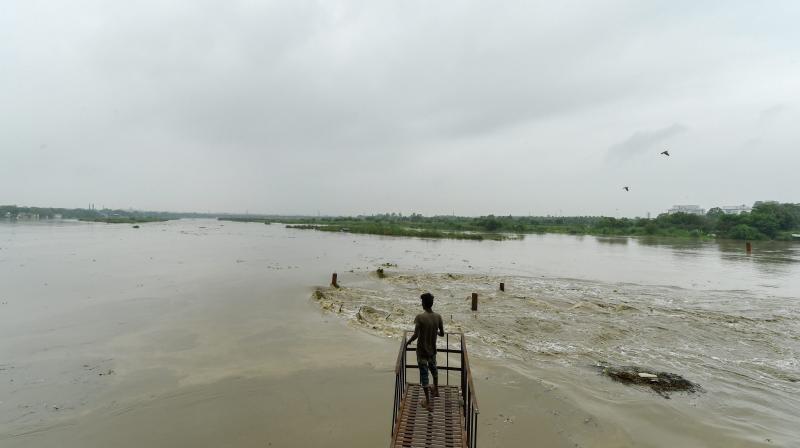 The water released from the barrage, which provides drinking water to Delhi, which normally takes 72 hours to reach the city. (Photo: PTI)

New Delhi: Almost two weeks after the water level in the Yamuna receded, the river again started to swell up at 4 pm on Tuesday and crossed the danger mark of 204.83 metres and reached 205.15 metres.

The water released from the barrage, which provides drinking water to Delhi, which normally takes 72 hours to reach the city. Himachal Pradesh has been receiving heavy rainfall from the past few days due to which, the Yamuna is in spate.

The river had crossed the danger mark on July 28 after parts of northern India, including Delhi, witnessed heavy rains.

In a review meeting held on Tuesday, the Delhi chief secretary has directed all the departments to take the same steps which were taken between July 28 and July 31 — when the river flowed above the danger mark. He directed the departments to deploy boats at vulnerable points. People living in the rive-rbeds have been relocated from Wednesday morning, and buildings or tents have been installed by the government in higher areas.

A statement from the office of the divisional commissioner said that the Central Secretariat directed all the officers to be proactive in taking measures of evacuation and providing relief to the people in the low lying areas. “All the six district magistrates have been directed to get the tents pitched, provide food from August 16 onwards, and take all measures to assist people affected by the rising water level in Yamuna river,” it said. Today the water level at 4 pm at Delhi railway bridge reached 205.15 metres which is above danger mark,” it said.