The sealing drive is being supervised by a Supreme Court appointed monitoring committee. 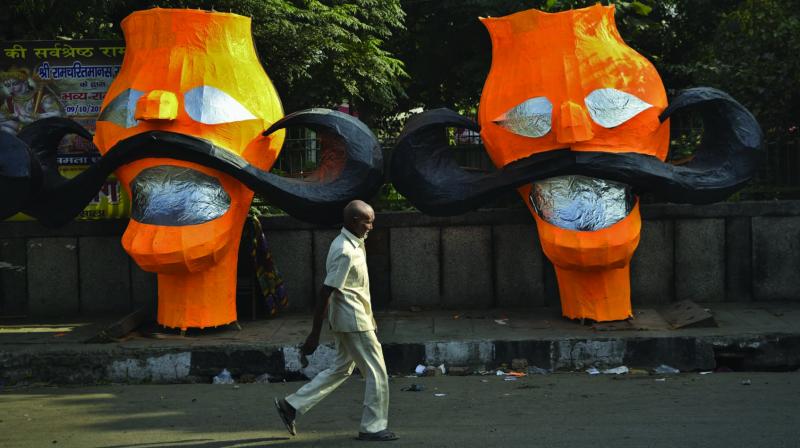 A man walks past effigies of Ravan displayed for sale ahead of Dussehra in New Delhi on Sunday. (Photo: PTI)

New Delhi: The Delhi Congress has decided to burn effigies of AAP and BJP leaders on the eve of Dussehra over their “failure” to provide relief to the people of the national capital from the sealing drive.

The senior Delhi Congress leader, Mukesh Sharma, said that specially designed Ravana effigies with multiple heads of the mythical demon king replaced by pictures of BJP and AAP leaders will be burnt at 14 locations in the city.

Mr Sharma said, “This is our protest against the ruling AAP in Delhi and the BJP at the Centre over their failure to do anything for Delhiites hit by illegal sealing in many areas.” Mr Sharma, who is the convener of Congress’ Nyay Yudh campaign against the sealing drive, said: “At the centre will be photos of Narendra Modi and Arvind Kejriwal, flanked on either side by BJP MPs from Delhi and AAP ministers.”

He said one of the effigies would be torched by Delhi Congress president Ajay Maken.

A large number of commercial and residential premises have been sealed by BJP-ruled municipal corporations in the city for violating the city’s master plan. The sealing drive is being supervised by a Supreme Court appointed monitoring committee. The three major political outfits in Delhi — AAP, BJP, and Congress — have been engaged in blame game over the issue in the run-up to the Lok Sabha elections next year.

Delhi BJP chief Manoj Tiwari, who alleged that an “illegal” sealing industry was coming up due to “corrupt” officials, is facing a contempt notice for breaking the seal on a premise in Gokalpuri that was sealed by civic officials. The ruling AAP has demanded an ordinance from the Centre to stop the sealing while accusing BJP of being involved in corruption in the three municipal corporations of the national capital ruled by it.