JNU, meanwhile, issued a statement to say that it would extend full cooperation to find Najeeb. 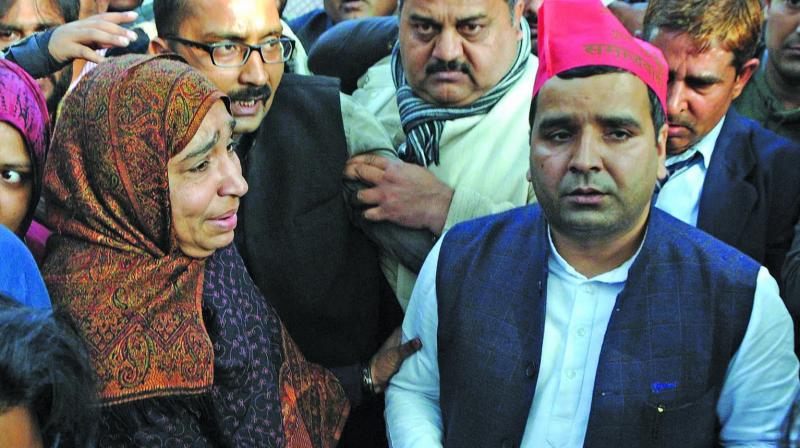 Missing JNU student Najeeb Ahmed’s mother talks to Samajwadi Party MP Dharmendra Yadav during a protest march in New Delhi on Wednesday. Najeeb’s mother Fatima Nafees on Wednesday sought people’s support to find her son as she led a protest march attended by activists, political leaders and people from her hometown Badaun. ‘I thank everyone for being with me in my struggle to find Najeeb and I want you all till he is found,’ Ms Nafees said while addressing the protesters. (Photo: Biplab Banerjee)

New Delhi: Taking a strong view of Delhi police’s failure to find missing JNU student Najeeb Ahmed, the Delhi high court on Wednesday ordered that the JNU campus be thoroughly scanned using sniffer dogs. Expressing their concern and shock,  a two-judge bench of Justices G.S Sistani and Vijay Goel directed that the police to use all its power and muscle to find the missing student.

The court also directed the police to take all necessary steps without further loss of time to trace Najeeb, saying there has been delay in recording statements of some students suspected of thrashing him a day before his disappearance.

“It has been more than two months, use sniffer dogs in the campus, hostels, rooftops and classrooms in the university,” the bench said. It directed the JNU Students’ Union to provide an NOC for search in the campus to expedite the procedure.

JNU, meanwhile, issued a statement to say that it would extend full cooperation to find Najeeb. “Thanks to the Delhi high court’s direction to the Delhi police to search the university campus accommodation, ad-block, and the green areas using sniffer dogs, which has now long been a demand of JNUSU. In fact, the Delhi police should have done this right in the beginning when they could not find the whereabouts of Najeeb. JNUSU has been pointing out this lapse on the part of Delhi police even in its submission to the Petitioner in the Court. We appeal to everyone to please cooperate with the High Court directions and in our struggle to find Najeeb (sic),” the statement read.

The court also said the police was free to search Jamia Millia Islamia University also, if required. An earlier police report had said that he had taken an auto-rickshaw to Jamia Nagar, where Jamia Milia is located. In case of any resistance or objection to it from the university or its students, the agency could approach the court for permission.

The bench said it was not concerned about which students’ union did what and it was not on a fact-finding mission regarding what JNU did wrong or right. “We are only concerned with where he has vanished,” it said.

The directions came on the habeus corpus plea by Najeeb’s mother, Fatima Nafees, who has moved court to trace her son, who has been missing since the intervening night of October 14-15.