Kejriwal called a dinner meeting of his Cabinet ministers to discuss a roadmap for Delhi’s development. 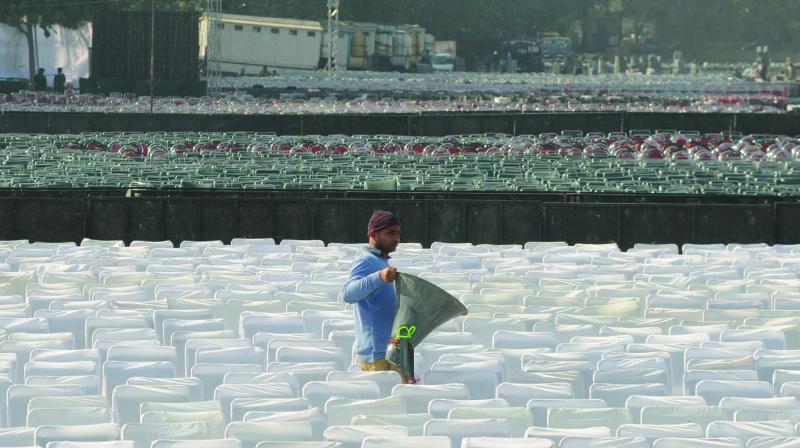 A worker at Ramlila Ground on Saturday. (Photo: BIPLAB BANERJEE)

New Delhi: Around 50 people from different walks of life who are “Delhi ke nirmata” and contributed to the development of the city during the last five years will share the stage when Arvind Kejriwal will take oath as Delhi chief minister for the third successive time on Sunday, along with six others as ministers.

Mr Kejriwal called a dinner meeting of his Cabinet ministers to discuss a roadmap for Delhi’s development. According to party functionaries, Mr Kejriwal discussed with his ministers initiatives that need to be prioritised and action items for the Delhi government in the coming three months.

Mr Sisodia told the media after the meeting that Mr Kejriwal has asked all cabinet ministers, who will take oath on Sunday along with him, to work dedicatedly towards fulfilling the promises listed in the “guarantee card”.

“We have been asked to start working towards fulfilling our promises in the guarantee card as soon as we are sworn in,” he said. The card, “10 guarantees of Kejriwal”, was released by the Aam Aadmi Party (AAP) national convener ahead of the Delhi assembly polls.

Kejriwal in the card gave certain guarantees to the people of Delhi, including plans to plant two crore saplings, clean the Yamuna river and reduce pollution in Delhi, over the next five years.

“Hosted my Delhi Cabinet designate colleagues for dinner at my residence. Congratulated them on their victory in the election and wished them success for their terms as ministers in the Delhi government,” Mr Kejriwal said in his tweet.

Mr Kejriwal also discussed the roadmap for making Delhi a global city. The Cabinet ministers designate deliberated upon the roadmap for Delhi’s development, especially the initiatives that need to be prioritised  in the coming three months.