CM Kejriwal fears Manish Sisodia, Jain may be forced out of L-G office 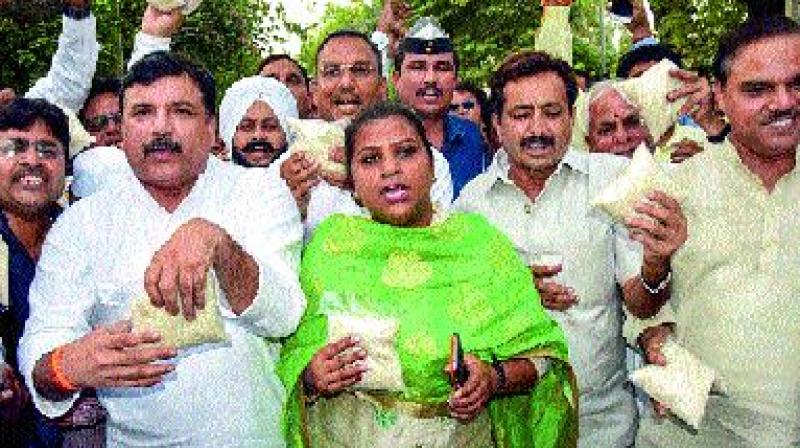 AAP leaders send off packets of ration to PM Narendra Modi during a protest over the issue of home delivery of ration not being implemented in New Delhi on Friday. (Photo: PTI)

New Delhi: With the Centre deploying more police force near the lieutenant-governor’s house on Friday, the Aam Aadmi Party (AAP) apprehended moves to break the five-day-old sit-in strike by Delhi chief minister Arvind Kejriwal, even as his deputy Manish Sisodia threatened to intensify their agitation.

Rushing an ambulance along with a team of over 20 doctors added to panic in the AAP camp.

After a team of doctors and medical staff arrived for their health check up, Mr Kejriwal expressed apprehension that his deputy Manish Sisodia and health minister Satyendar Jain may be forced out of the L-G office.

Additional police force has also been deployed in the area. According to informed sources, the L-G office is planning to take them out of the office forcefully.

Mr Jain and Mr Sisodia have been on an indefinite hunger strike since Tuesday and Wednesday respectively at the L-G office to press for their demands, including a direction to IAS officers to end their “strike.”

“Why r they planning to take them forcefully? It is just 4 days. Both of them r fit. They r fighting for the people of Delhi (sic),” Mr Kejriwal tweeted.

Mr Sisodia also released a video from the L-G office and warned that if they are forcibly removed from the L-G Secretariat, they will stop drinking water too.

“Around 20-25 people have reached the L-G office. It seems there is preparation to forcibly remove us. I want to warn Prime Minister Narendra Modi, the L-G, and police not to try to end our fast as we have been sitting on hunger strike here for the people of Delhi. Please focus on our demands. If we are forcibly removed, we will give up even water,” Mr Sisodia said in the video.

“A regular team — consisting of a doctor, a nurse, and a helper — has been visiting to check on the health of the ministers. On Friday afternoon, a team of specialists visited them,” he said.

“At 2.30 pm, his (Mr Jain’s) vitals were checked and his sugar level was 57 units (mg/dL). His blood pressure reading was 98/64, while the pulse reading was 70. However, ketone level (more than 3 units) has been detected in his body. In normal condition, ketone should not be found,” the official said.

Asked about Mr Sisodia’s condition, he said, “The deputy chief minister is doing fine. There is no need to hospitalise them as of now.”

Meanwhile, Mr Kejriwal wrote a second letter to Prime Minister Narendra Modi in as many days on the issue and challenged him to work without the officers attending his meetings.

“How do we work like this? Can Modi ji try working like this even for a day? Can our critics kindly tell us how do we function like this? (sic),” Mr Kejriwal tweeted after Delhi environment minister Imran Hussain alleged that environment secretary did not attend a meeting on pollution in the evening.