The ones under the scanner include vice presidents, general secretaries, secretaries, spokespersons, and heads of several departments and cells. 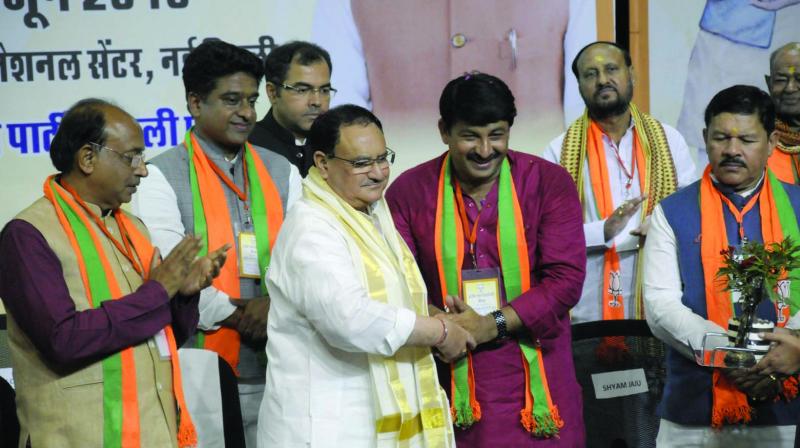 In an attempt to strengthen the Delhi Bharatiya Janata Party, the top party leadership is likely to replace about 15 to 20 office bearers ahead of next year’s Assembly polls. (Photo: SONDEEP SHANKAR)

NEW DELHI: In an attempt to strengthen the Delhi Bharatiya Janata Party, the top party leadership is likely to replace about 15 to 20 office bearers ahead of next year’s Assembly polls.

According to a party insider, the axe is likely to fall upon those who failed to meet the expectations of the party leadership in the recently concluded Lok Sabha elections.

These existing office bearers are set to be replaced with efficient, young, experienced, and hardworking workers from the state unit.

Sources said the performance report showed that several office bearers had performed very poorly and had worked against the interests of the party’s official candidates during the parliamentary elections.

The ones under the scanner include vice presidents, general secretaries, secretaries, spokespersons, and heads of several departments and cells.

“The state leadership has found that around 15 to 20 office bearers are least interested in the organisational work and more busy visiting only senior leaders. They are hardly contributing at the grassroots level,” the party insider said.

A senior party leader said that in the recent past, the Delhi Bharatiya Janata Party had witnessed differences of opinions among its office bearers over a host of issues.

Since their differences are deepening further and the state elections are in the offing, it has been necessary to go for a major reshuffle to strengthen the organisation.

Sources said that stringent action will be taken against the errant leaders in a week’s time.

“Office bearers, who are more interested in lobbying or visiting central leaders than working on the grassroots level, will face the action. A performance report of the office bearers, based on the inputs gathered from various sources, is reportedly ready and they will soon face strict action,” sources said.

There is a feeling among the state leadership that with the current team of office bearers it will be difficult for the party to take on Aam Aadmi Party in the state polls.

The Aam Aadmi Party had won 67 of the 70 seats in the last elections. The Bharatiya Janata Party was able to wrest control of just three seats.