Delhi turns into a fortress on Independence Day 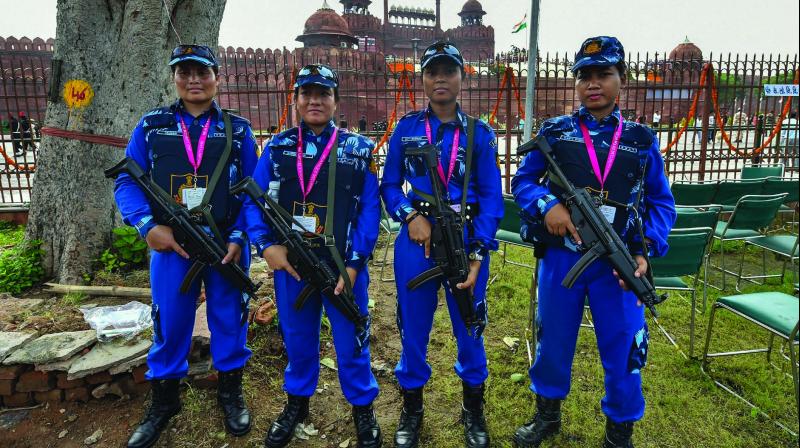 Members of the all-women SWAT team stand guard during the 72nd Independence Day function at the historic Red Fort in Delhi on Wednesday. (Photo: PTI)

New Delhi: In its maiden field job India’s first all-women SWAT team beamed with pride as it provided security cover to Red Fort on the Independence Day. In the wake of terror alerts, a security perimeter consisting NSG snip-ers, elite SWAT commandos, were guarding the Red Fort, where Prime Minister Narendra Modi addressed the nation on the 72nd Independence Day.

A senior officer said that they had also recei-ved inputs about the possibility of three men from Jaish-e-Mohammad being present in the national capital to carry out terror attacks.

On Monday, police were informed that a man, wearing uniform of an Indian Air Force officer, was suspiciously roaming near the Rajiv Chowk Metro station, and when he tried to call him, the man in uniform just fled from there.

While nearly 70,000 Delhi police personnel were guarding the national capital, close to 10,000 policemen have been dep-loyed at the Red Fort, which will see the presence of senior ministers, top bureaucrats, foreign dignitaries and common people during Mr Modi’s speech.

The 36 members of all-women team, Special Weapons And Tactics (SWAT) has been trained by the NSG for anti-terrorism duty under the Delhi police’s Special Cell. The entire team hails from northeast. Sumata Rabta, a member of the team, said it has been her life-long dream to protect the country.

“I will always remember this day when I got the opportunity to provide security on one of the key events in the country,” Rabta said.

Dipti Barman, another member said, “I can feel the responsibility and my team would give its complete support in fulfilling every task assigned to it,” Barman said.

She hoped people change their perception towards the citizens of the northeast and realise their capability. Another team member, Mihnhunsa, felt proud to don the uniform.

“Even though it is difficult task to change people’s set notions about our region, we can try to do so through our uniform,” she said.

PM Modi in his Independence Day speech said, the government has brought Delhi close to the north east and the region has become an inspiration for everyone.

The 36 women commandos, who broke the traditional male stronghold to enter the SWAT team, were formally inducted on August 10.