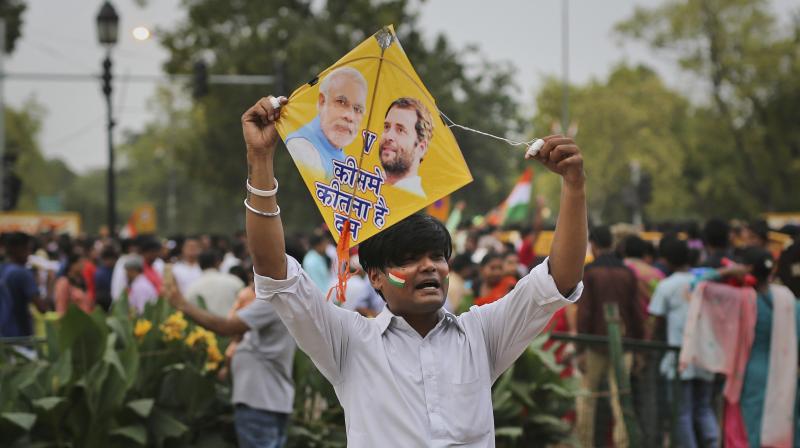 A man holds a kite at the India Gate war mem-orial on Independence Day in New Delhi on Wednesday. (Photo: PTI)

New Delhi: Braving humid weather and scorching heat, scores of people turned up at the  Red Fort to witness and the unfurling of the tricolour and listen to the speech of Prime Minister Narendra Modi on the 72nd Independence day celebrations on Wednes-day.

Despite heavy security and traffic restrictions, the diversity and patriotism among the crowd on the occasion was stark and visible. People from across the country and various castes and religions had come to be a part of the celebration. Witnessing the celebration live at the Red Fort was a first for many of them. The spectators, especially school kids cheered with joy when they saw the cavalcade of Narendra Modi and chanted Modi Modi and Bharat Mata Ki Jai slogans.

Breaking the protocol for the fourth consecutive time Mr Modi followed his ritual and met the elated students after delivering his 82-minute long speech. The prime minister got off his car along with the security personnel and shook hands with the kids, dressed in white, green and saffron.

Alkendra who came from Rajasthan said, “Initially we were a bit skeptical, whether we wo-uld be able to reach the venue and see the prime minister due to heavy security but the Delhi police and other security forces has made it possible des-pite this level of security. A 70-year old man said, “I have seen number of PM’s delivering speeches from the rampart of Red fort but there something different about him. It is not like every politician is bad but there are some fringe groups who create nuisance”. “Not everyone ge-ts a chance to see the flag hoisting on Independence Day. We are lucky to have a PM like this who thinks that women are equal to men, said Rajni adding that, “ his belief in women empowerment is a source of motivation for us.”

However, there were others who felt that Modi did not address someimportant issues like lynching, unemployment, etc which they wereexpecting.

As soon as the LED screens showed Modi, sporting a Bhagwa turban,taking the stage for flag hoisting, the crowd broke into cheers.