PM Modi stayed consistent with his turban but experimented with the design. 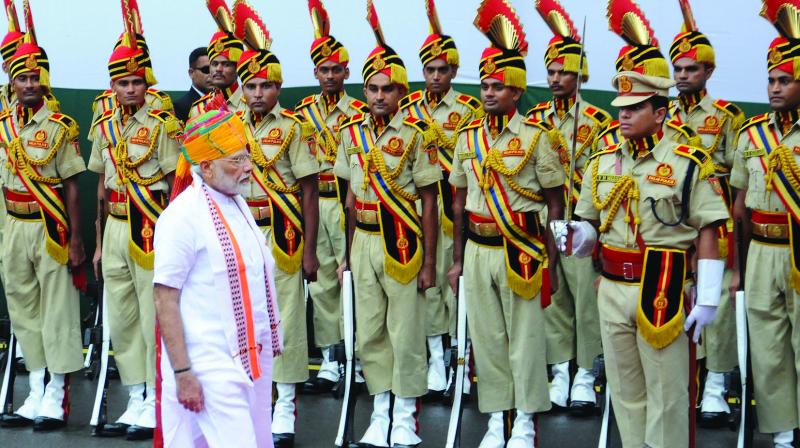 Prime Minister Narendra Modi inspecting guard of honour from a contingent of Delhi police on the Independence Day at Red Fort in New Delhi on Thursday. (Photo: G. N. JHA)

New Delhi: Sporting the theme of unity, diversity, and patriotism while wearing the traditional attire of their respective states and filled with the spirit of celebrating 73rd Independence Day, scores of denizens sported the national colours on Thursday, braving humid weather and mild showers which left the ground soggy and muddy.

The spectators were filled with enthusiasm when Prime Minister Narendra Modi arrived at the Red Fort and unfurled the national flag on the occasion of the 73rd Independence Day.

PM Modi stayed consistent with his turban but experimented with the design. This time, he was seen sporting a Rajasthani turban and was dressed in a white kurta-pyjama.

After unfurling the national flag, PM Modi delivered his sixth consecutive speech, which lasted for nearly 92 minutes. During his address, PM Modi appealed to the people to take a pledge on October 2 to make the country free of single-use plastic.

“Can we free India from single-use plastic? Can we take the first step towards this on October 2? I invite industries and start-ups to help recycle plastic,” he said.

PM Modi further reiterated that providing drinking water to all remains a priority.

“The movement towards water conservation has to take place at the grassroots level. It cannot become a mere government programme. People from all walks of life have to be integrated in this movement,” he said.

The most important takeaway for children and teachers at the Red Fort from PM Modi’s speech was the message to conserve water.

Scores of girl students from various schools made a coordinated formation of “Naya Bharat.” “Naya Bharat” or “New India” is a byword used by Prime Minister Modi to signify the “new, aspirational and prosperous India” that his government seeks to build.

For the “Naya Bharat” formation, students wearing blue dresses represented the text of the phrase (in Hindi) and those wearing white stood in coordinated fashion to make the plain background.

Adjoining the formation and facing the ramparts of the 17th century Mughal monument was another formation in which students depicted a fluttering tricolour.

Once again breaking the protocol, Mr Modi followed his ritual and met the elated students after delivering his speech. The Prime Minister got off his car along with the security personnel and shook hands with the kids who were dressed in white, green and saffron.

A number of children, who had come to the Red Fort to hear Mr Modi’s Independence Day address, stayed back to collect the plastic waste, cups, and banana peels strewn around the venue after the event, setting an example for others to follow while many returned home with the Prime Minister’s message to cut down on plastic use.