A five-foot-long Indian Rock Python was rescued from the Qutub Minar complex in South Delhi on Friday night. 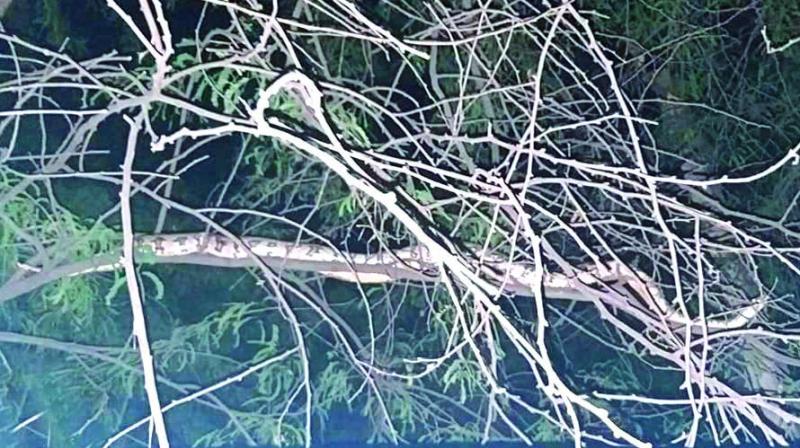 The snake was seen scaling a tree near the boundary wall of the Qutub complex.

New Delhi: A five-foot-long Indian Rock Python was rescued from the Qutub Minar complex in South Delhi on Friday night.

A concerned passerby saw the snake scaling a tree near the boundary wall and called NGO Wildlife SOS for help. Following this, a team of two snake rescuers reached the historical site in Mehrauli and rescued it.

It took 30 minutes to safely extricate the python from the tree.

Wasim Akram, the manager of Wildlife SOS special projects, said: “Sanjay Van is home to some unique wildlife species such as pythons, nilgais, golden jackals, crested honey buzzards, etc. With increasing urbanisation, construction, shrinking habitats, and loss of natural prey base, wildlife species are often forced to move into human settlements in search of shelter and easy prey.” Kartick Satyanarayan, the co-founder of Wildlife SOS, said: “Indian Rock Pythons, though commonly found across India, face extreme threat owing to prevalent misunderstanding and ignorance amongst people. They are often confused with the venomous Russell’s viper. These reptiles often get killed when they venture into human habitations. Wildlife SOS works towards changing this attitude and sensitising the public to the presence of urban wildlife.” Following this incident, the team also rushed to Talkatora Stadium to rescue a four-foot-long cobra from the premises. Both snakes are currently kept under observation and will soon be released into the wild.