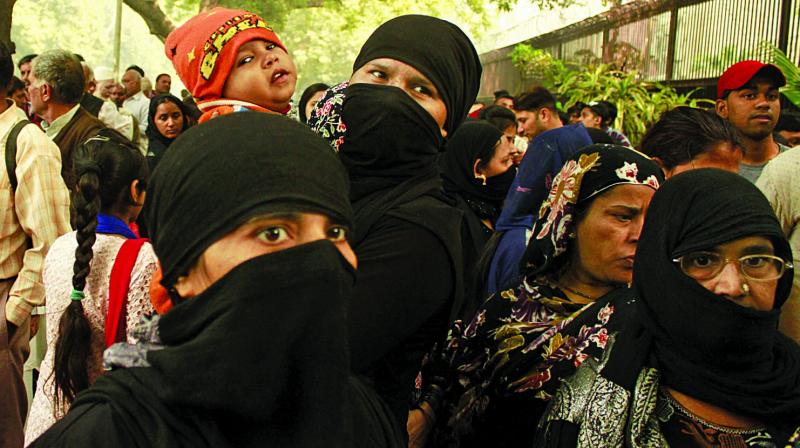 The petitioner had stated that the burqa can pose a security threat.

New Delhi: Stating that banning burqa is not a public interest matter, the Delhi high court rubbished a PIL seeking a ban on the face veils in the national capital. The petitioner had stated that the burqa can pose a security threat.

A bench of Chief Justice G. Rohini and Justice Sangeeta Dhingra Sehgal dismissed the plea saying, “If it is a policy decision, the government will take care of it. How can we entertain it (PIL) under Article 226 (power of high courts to issue certain writs)?
“We cannot interfere in this writ petition. The same is dismissed. It is not an issue that deserves consideration by this court under the article. It is not a matter of public interest.”

The plea sought a ban on wearing face veils including burqas, helmets, hoods, etc. at public places like transport, government buildings, and heritage sites in the capital on the grounds of threat from terrorist activities.

The plea, filed by Sardar Ravi Ranjan Singh, alleged, “The use of face coverings and wearing of full body cover like the burqa is a serious security issue and citizens are put to constant risk and fear in the national capital which is in violation of Article 21(protection of life and personal liberty) of the Constitution of India.”

It said, “There is a rapid growth in terrorist activities and the perpetrators of these criminal acts show no respect to burqa and ruthlessly use it as an instrument to carry out ‘fidayeen’ attacks.”

The petitioner also referred to the recent attacks in Uri in Jammu and Kashmir and said that public safety and the government offices in the capital are at constant risk.

“Face veils or burqas can be used to prevent identification at border check-posts etc. Further, criminals and extremists can use burqas to skip checking at police posts and barricades,” the PIL, which made the Centre, Delhi government, and National Security Council as parties, said.