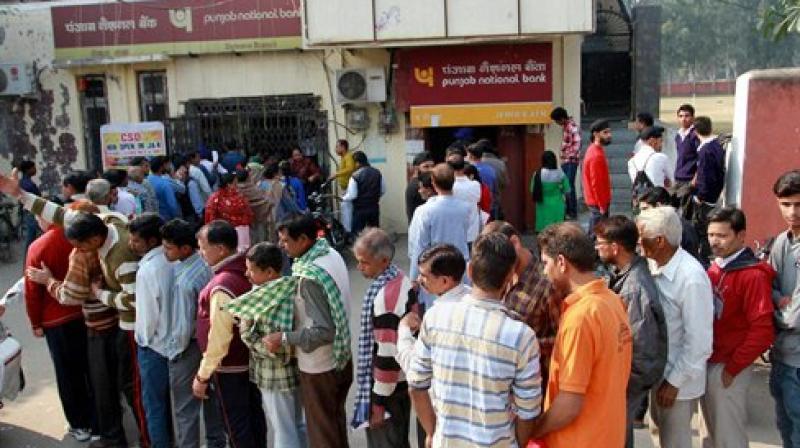 People wait in a queue to withdraw money from ATM in New Delhi on Tuesday. (Representational Image)

New Delhi: Homemakers have been made to declare their “black money” after the Union government abolished Rs 500 and Rs 1,000 rupee banknotes, Ghaziabad resident Padma Jha said. According to her, the families living in housing societies in Delhi’s suburb are facing quite an ordeal because of the ongoing liquidity crisis.

From buying monthly ration on credit to maids demanding an early salary, the middle-class families are grappling with quite a lot of issues due to the withdrawal of high-value currency notes from circulation.

“My mother-in-law said she has seven bank notes of Rs 500 denomination. She declared her ‘black money’ on Monday. My mother also declared Rs 25,000 in ‘black money.’ It was her two years’ saving. Similarly, many homemakers in our housing society had to declare their hidden savings to their husbands,” Ms Jha said. Her husband got monthly groceries on credit as he didn’t have enough cash with him, she said.

“He has to take time out from work to stand in queues outside banks or ATMs. Our monthly expenses also include medicines for my in-laws. Making ends meet has suddenly become very difficult for not only us but also for the other families in our neighbourhood. Even the local grocery store has to extend credit, as it doesn’t accept cards,” Ms Jha said.

Her parents, who live in Ashiana Village, Bhiwadi, are facing lots of problems. “Ashiana Village is sort of a retirement home. Only old people can have houses there. They tend to keep a lot of cash to the tune of Rs 50,000-60,000 for medical emergencies. They are suddenly left with a lot of abolished notes,” she said. Ms Jha called the Prime Minister Narendra Modi’s demonetisation scheme a radical, but not a well thought out move.