Prices of vegetables, fruits stable, but vendors take a hit

Grocery stores in the area have less rush than usual. 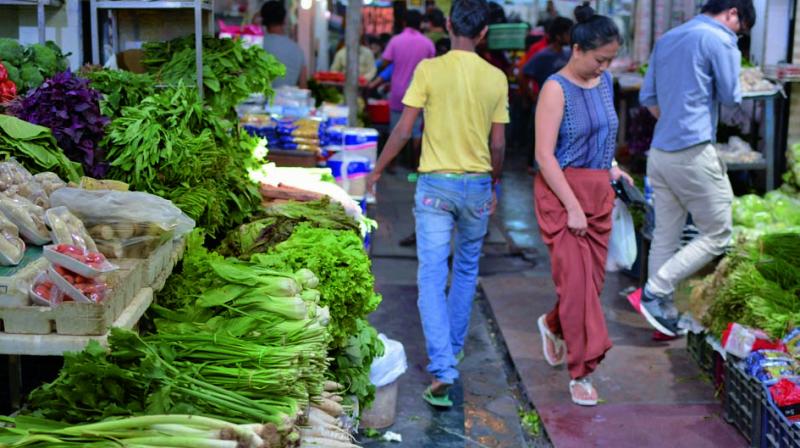 Buyers in the market said the prices of essentials have not increased, but some of the stores have run out of stock due to the liquidity crunch in the market.

NEW DELHI: Prices of vegetables, fruits, and groceries have not risen in the INA market, but store owners said they are suffering losses due to a sudden dip in sales. Many shops in the South Delhi market have put out notices saying they do not accept old currency notes.

“We have not increased the prices at all in the last one week,” said Ritu Batra, whose shop sells fruits and dairy products. Ms Batra said her sales are down to half due to demonetisation of high-value currency notes.

“Only big shops in the market have card swipe machines,” she said, adding that her current account in a government bank doesn’t allow her the facility to accept electronic transfer of money. But many other shops in the area, including a tobacconist, are accepting payments through a mobile payment gateway.

“I started accepting payment through Paytm Wallet since Monday. Many people use to turn up with their old and new high-value currency notes. It had become increasingly difficult to tender change,” the tobacconist said, adding that prices of cigarettes have gone up by a rupee or two as suppliers are charging more.

Grocery stores in the area have less rush than usual. “Due to the ongoing cash crunch, people are buying their monthly ration online,” another store owner Rajender Gupta said. Buyers in the market said the prices of essentials have not increased, but some of the stores have run out of stock due to the liquidity crunch in the market. Some even complain that the local store owners do not tender the right change and urge their customers to buy more in case they produce high-value currency notes.

A florist in the market said that his business has suffered big time due to the withdrawal of Rs 500 and Rs 1,000 notes. “We are buying less because we deal in perishables. Such is the desperation that the wholesalers in mandis are willing to accept the old currency notes. In such a scenario, how can prices increase?” Manoj Kumar, who has been running the flower shop in the INA market for last 30 years, said. However, he said that price of flour has increased from Rs 20-21 per kg to Rs 26 per kg.