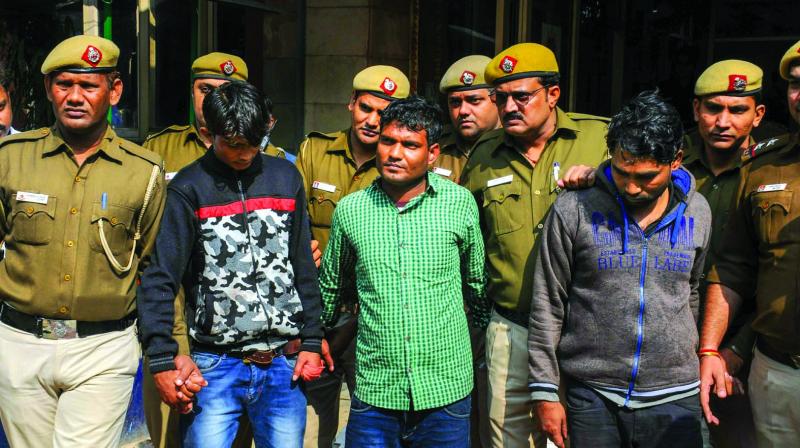 The three (above) accused for the murder of fashion designer Mala Lakhani and her domestic help at Vasant Kunj. (Photo: Asian age)

New Delhi: A fashion designer and her domestic help were allegedly stabbed to death by her tailor and his two accomplices at her home in South Delhi’s posh Vasant Kunj Enclave area following a dispute over unpaid dues.

Later, the three accused surrendered before the police fearing the cops might trouble their families and that they couldn’t evade arrest for long.

Mala Lakhani (53), a fashion designer, ran a boutique named Tulsi Creations in Green Park. She lived in a plush mansion with high walls and gates. The servant’s name was Bahadur (50), a Nepalese national. The duo was found inside the bungalow in the arrly hours of Thursday with multiple stab wounds.

The accused looted jewellery and ransacked the house after killing the two, the police said, estimating that the incident took place between 10.00 pm and 11.30 pm on Wednesday.

Rahul Anwar (24), the master tailor who worked with Lakhani; his cousin Rahmat (24); and his friend Wasim (25) have been arrested in connection with the killings, a senior police officer said.

Around 2.45 am, the three men went to the Vasant Kunj (South) police station and said they had killed two people in Vasant Kunj Enclave. Following this, officials rushed to the spot to verify the details.

They found the bodies in a pool of blood. A case has been registered and the three accused have been arrested, DCP (Southwest) Devender Arya said.

The police said Lakhani had set up a tailoring workshop at her home. During interrogation, the trio said they had hatched a conspiracy to kill her. Anwar claimed Lakhani had not paid him for a couple of months and would pay in piecemeal. He had been working under Lakhani for close to three years.

He was annoyed with this behaviour and hatched a plan 10 days ago to kill her, a senior officer said.

The accused said that after committing the crime, they stole valuable items, including jewellery, from the house and left in Lakhani’s car.

The police said the accused had four knives with them, which they had purchased from a weekly Sunday Bazar in Vasant Kunj. After killing Lakhani and her domestic help, the accused went to a pond behind Rangpuri Pahari area in Vasant Kunj to discreetly dispose of the knives and their clothes that had bloodstains.

The accused thought the police would trouble their families if they ran away. So, they decided to surrender, the senior officer said.

The police said Lakhani was single and had been living in Vasant Kunj for several years. Her sister lives in Gurgaon, while her brother lives in Goa.

The bodies have been sent for a post-mortem, police said.