Odd-even can make comeback in Delhi 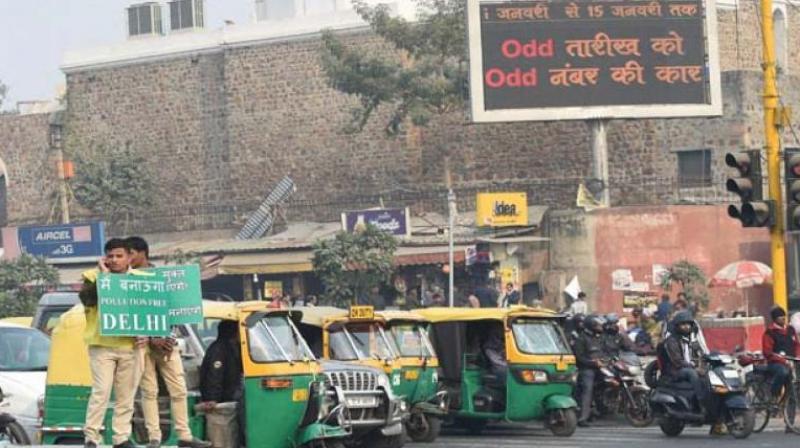 The government can implement these measures in the wake of the Union environment ministry’s notification issued on January 12. (Photo: PTI)

New Delhi: The AAP government can bring in odd-even car rationing scheme and put a ban on construction activities among a host of other measures to improve air quality in case the pollution level touches emergency proportions in the national capital. The government has been indirectly armed by the Centre to take a series of emergency measures to ensure air pollution levels do not cross the dangerous mark.

The government can implement these measures in the wake of the Union environment ministry’s notification issued on January 12. The notification has assigned the task to implement emergency measures to check to the Environment Pollution Control and Prevention Authority (EPCA), which was appointed by the apex court. The plan had recommended that if the air pollution levels cross the dangerous levels for two consecutive days, the state can implement the odd-even car scheme, ban construction activities, close brick kilns, hot mix plants and stone crushers, ban use of diesel generators, intensify public transport services, bring about a three-fold hike in parking fees and stall mechanised cleaning of roads.

It was after the Central Pollution Control Board (CPCB) submitted its graded response plan to check air pollution in Delhi-NCR to the SC, it not only acce-pted it but also told the Centre to notify it. The court then appointed the EPCA to look into the report.

While terming air pollution in Delhi and NCR as a “matter of serious concern” that requires “urgent action”, the environment ministry has assigned the task to implement the plan to the EPCA under the Environment (Protection) Act, 1986.

The notification said: “In pursuance of sub-section (1) of section 3 of the Environment (Protection) Act, 1986 (29 of 1986), the Central Government hereby assigns the task of implementation of the Graded Response Action Plan to the EPCA...”.

“High level of air pollution in Delhi and National Capital Region of Delhi has been a matter of serious concern and requires urgent measures to address the issue, particularly with reference to episodic rises in pollution levels,” the notification said.