Ajay Maken handed over his charge of DPCC president to Sheila by appreciating her work as the chief minister. 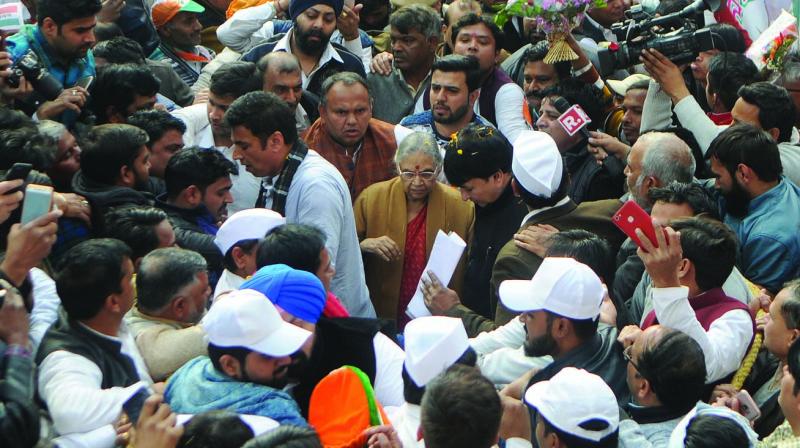 New Delhi: Scores of Congress workers filled with enthusiasm turned up at Rajiv Bhavan, which is Delhi state Congress office, on Wednesday to witness Sheila Dikshit taking charge as the party’s Delhi chief.

Ajay Maken handed over his charge of DPCC president to Ms Sheila by appreciating her work as the chief minister.

“Before 1998 the Delhi had a severe electricity crisis but after she took over as the CM, we have achieved round the clock electricity and even developed the infrastructure,” Mr Mr Maken said.

80-year-old Ms Dikshit, who took charge of state president after two decad-es, was a bit emotional.

“As enthusiastic workers have gathered here, similarly we will together strengthen the Congress,” she said.

“Our target is to reach out to the people at every nook and corner of Delhi, to ensure the victory of the Congress party, in all the seven Parliamentary seats in Delhi. I will be available to the Congress workers 24 hours a day to motivate them to work for the party at the grass-root level,” she added.

“We have to revive the scattered Congress. Both the parties are a challenge for use,” she said and dismissed alliance with the AAP.

Shiromani Akali Dal MLA Manjinder Singh Sirsa alleged that Mr Tytler’s presence in the front row at the event where Ms Dikshit took over as Delhi unit president was to “intimidate” witnesses in cases related to 1984 anti-Sikh riots. He claimed the Congress is “afraid as it is aware that Mr Tytler and Madhya Pradesh chief minister Kamal Nath would also be jailed” in cases related to the anti-Sikh riots.

The Aam Aadmi Party(AAP) alleged that the incident exposed Congress’ anti-Sikh face and demanded that the party leaders clear their stand on Mr Tytler.

However, Ms Dikshit backed the Congress leader’s presence at the event and accused the BJP and SAD of having a narrow view of looking at things.

“Its a very narrow way of looking at things. After all, he is a Congressman. The Congress has not shunted him out and he has not gone away from the party. So, why make an issue out of a non-issue,”

Meanwhile a jubilant NSUI member Nirbhay Yadav said, “Ajayji is like our elder brother but we look up to Sheilaji as a mother with whom not only does the Congress but also Delhi connects. We are sure that under her regime the Congress will surely attain new heights.“