Amid chants of “Acche Beete Paanch Saal, Lage Raho Kejriwal”, Mr Sisodia held a padyatra in which he sought blessings of the people. 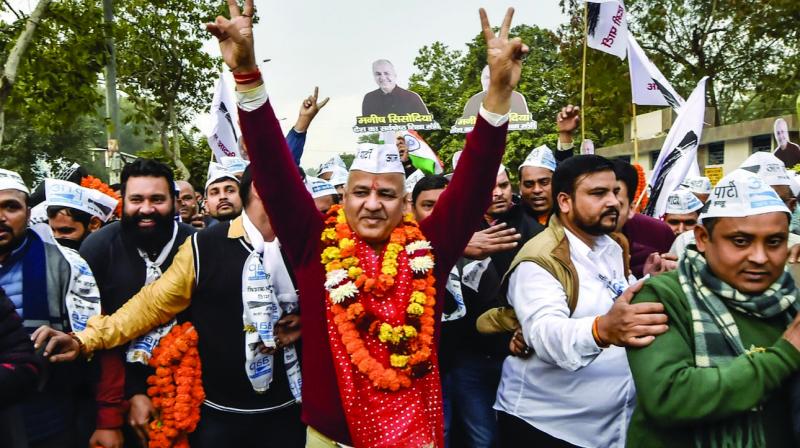 “He filed the nomination around 2 pm and there is no dummy candidate for him,” said an official. Mr Sisodia, the sitting Patparganj MLA, said the upcoming elections in Delhi would be based on the work done by the AAP government in the last five years.

Before filing his nomination, Mr Sisodia took out a rally in which hundreds of AAP supporters took part. His rally started with a padyatra followed by a bike rally to the election office in Patparganj.

Amid chants of “Acche Beete Paanch Saal, Lage Raho Kejriwal”, Mr Sisodia held a padyatra in which he sought blessings of the people. People watched from their houses as the deputy chief minister waved to them and greeted them with folded hands.

Exuding confidence, Mr Sisodia said the party will beat its previous record and win more than 67 seats in the upcoming polls. “My nomination is about the future of education of Patparganj and Delhi’s children, people’s health and electricity, water to their homes,” he said.

He started his roadshow from the Talab Chowk of the Patparganj constituency and met the people to thank them for their support in these past five years.

Addressing a gathering on the occasion, Mr Sisodia said: “In the past five years, the government has not only developed the Parparganj constituency but the entire city of Delhi witnessed the benefits of our good work and now the time has come when Parparganj will grow to new heights in the upcoming five years”.

He appealed to the people of the area that they should trust the Aam Aadmi Party and press the Jhaadu button on February 8 to make Arvind Kejriwal their chief minister again.

Mr Sisodia’s roadshow started from Talab Chowk onwards to Mandawali village and from there on it went to the Badrinath Mandir and Ram Chowk. After this, the rally came back to Talab Chowk from where a bike rally was flagged off that started from Alaap Chowk and went to the SDM’s office.

Before filing his nomination, Mr Sisodia said he feels that the people of Delhi will choose Arvind Kejriwal as their chief minister and Aam Aadmi Party as their government.

In 2015, the AAP won 67 out of 70 assembly seats, BJP won three and Congress drew a blank. The Delhi election is slated to be held on February 8.