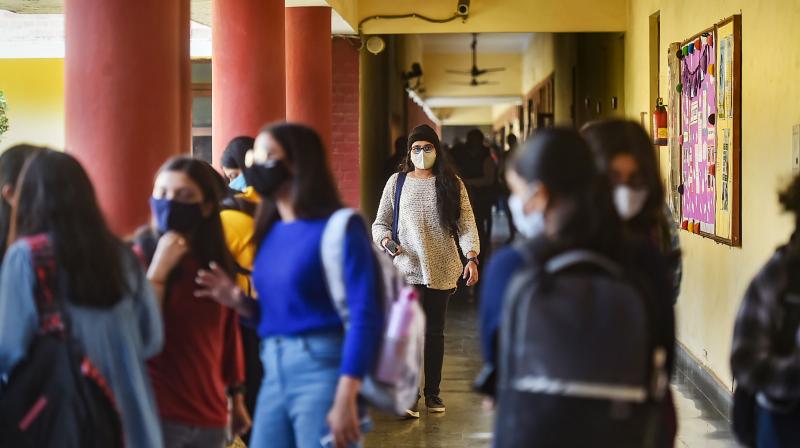 Students at the Miranda House College, as the Delhi University colleges have reopened for classes, in New Delhi. (Photo: PTI)

New Delhi: The hustle and bustle of Delhi University's North Campus returned after almost two years on Thursday as excited students made their way back to colleges on the first day of resumption of offline classes.

The Vishwavidyalaya Metro Station witnessed long queues of students. Many were waiting for their friends to arrive so that they could head for college together.

The excitement among the students of first year was palpable as they had especially decked up for their first day of college. Those in their second year were also feeling like freshers since they were about to set foot in their colleges for the first time.

Neha Dimri, a 19-year-old student of Hindu College, said, "We are excited and pumped up to be back in campus. There is a different vibe to DU."

Some parents were seen accompanying their children.

Rakesh, who goes by his first name, had come to see off his son, a second-year student of Kirori Mal College. They are from Rohtak and are also looking for accommodation.

"It is his first day and he is nervous, so I have come along with him," Rakesh said.

Students said they had several thoughts about how their first day in college after the pandemic would be.

"I could not sleep the whole night. I was so excited. It's after two years that I am coming back to college. In the last two years, I never woke up at 7 am but such was the excitement today that I was ready by 7 and left home thereafter," said Piyush, a third-year BSc Physics (Honours) student.

Waiting for his friends at the Vishwavidyalaya Metro Station, Piyush added he was even wearing a perfume and freshly ironed clothes for the special day.