A vendor named Nanban smiled in contentment and said: “Id-ul-Fitr, every year, turns out to be a very busy day.” 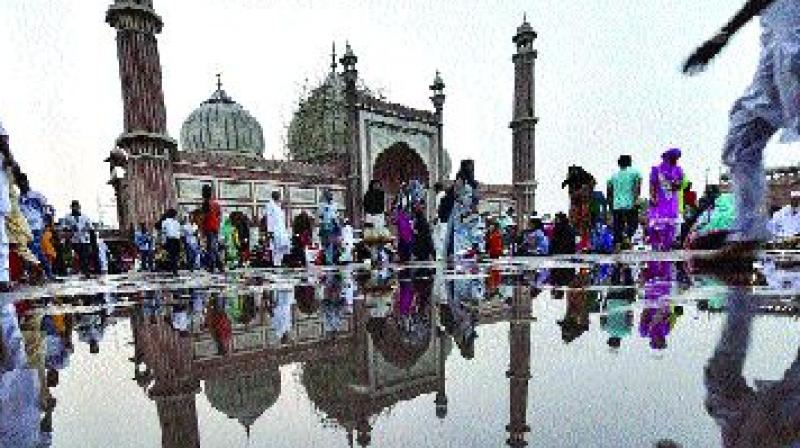 New Delhi: Muslims across the national capital celebrated Id-ul-Fitr on Saturday with fervour and gaiety while top political leaders shared greetings and offered namaz at the Parliament Street mosque.

The celebrations started after witnessing the crescent of the moon, which was cited around 7.35 in the evening on Friday. More than two hundred families gathered at Jama Masjid to bid adieu to the holy month of Ramzan, which started on May 17.

Id-ul-Fitr falls on the first day of the month of Shawwal and translates from Arabic as the “festival of breaking the fast.” The celebrations further took to colourful delights on June 16, when the entire city celebrated Id with great fervour and gaiety. The Old Delhi region, home to the famous Jama Masjid, remained packed with devotees. Followers also gathered in large numbers at Masjid Jamia Hamdard Nagar, Fatehpuri Masjid, Masjid Jamia Millia Islamia University Masjid, Faiz-e-Illahi Turkman Gate, and the India Gate with family and friends.

It was the narrow lanes of Chandni Chowk that observed crowds dressed in colourful clothes, all merry and jovial. There was a different aroma that floated in the air — the aroma of sewai, freshly cooked mutton curry, and chicken biryani.

Mohammad Razid, who visited Jama Masjid with his family, said: “We visit Jama Masjid every year during the time of Ramzan.”

In a street packed with people, the entire surrounding spoke in the language of joy, love, and devotion. Meena Bazar and the street adjacent to Jama Masjid were packed with people buying one thing or the other.

A vendor named Nanban smiled in contentment and said: “Id-ul-Fitr, every year, turns out to be a very busy day.”